Skip to main content
Switzerland: the referendum on marriage is a vote on equality
Submitted by Daniele Paletta on Fri, 09/24/2021 - 11:32
News tags:
marriage equality

On 26 September 2021, Switzerland will vote in a referendum on marriage equality.

The country will be asked to confirm or reject the clear vote of the Swiss parliament in December 2020 to open up marriage to all couples.
Read more in this article written by ILGA World Research Coordinator Lucas Ramón Mendos and Communications Manager Daniele Paletta.

This article first appeared on the Rosa Luxemburg Stiftung's website.
A translation is available in Spanish, French and German.

Switzerland: the referendum on marriage is a vote on equality

No family has it easy. But, in addition to whatever life throws at them, some families have an additional burden to face: a fight to be legally and equally recognised.

On 26 September 2021, after seven years of parliamentary debate, Switzerland will vote in a referendum on marriage equality: they will be asked to confirm or reject the clear vote of the Swiss parliament in December 2020 to open up marriage to all couples.

A few weeks ahead of the vote, the support for marriage equality across Switzerland seems clear. At least 23 municipalities hosted events in June 2021 to kick off the final run of the national “Yes, I do” campaign. A recent poll commissioned by the Swiss Broadcasting Corporation showed that 63% of the people surveyed are in favour of granting same-sex couples the right to marry. A clear call to equality is resonating in Pride events across the country. And yet, dissenting voices are making themselves heard – some even resorting to unfair tactics, such as launching cyberattacks against the website of the Civil Marriage for All national committee.

What is at stake?

Today, couples of the same gender can only enter a registered partnership in Switzerland. In 2020, the Swiss parliament introduced marriage equality, but a referendum opposing such a move was requested.

Under the amended law, as the Federal Council explains, same-sex couples would be able to have a civil wedding and would be placed on an equal footing with other married couples both institutionally and legally. The foreign spouse of a Swiss citizen would be able to apply for simplified naturalisation, for example. Same-sex couples would also be able to adopt a child together. In addition, married women couples would have access to legally regulated sperm donation. Registered partnerships could be converted into a marriage, but no longer entered into anew.

Same-sex marriage across the globe

In most countries, fully equal recognition under same-sex marriage laws was achieved only after less-comprehensive protections were adopted first. Cohabitation rights, registered partnerships and civil unions were available in most jurisdictions that now have equal marriage laws. In the case of Switzerland, these first steps were taken in 2007 with the Federal Law on Registered Partnerships and later in 2018 when second-parent adoption was legalised for couples living as registered partners or in de facto cohabitation.

In most countries, however, same-sex couples must survive with no protection whatsoever – leaving them vulnerable to economic and emotional instability. Only a handful of countries have moved forward: since 2000, an ever-increasing number of States have progressively extended the definition of marriage to fully protect and recognise same-sex couples and their families. To this date, there is at least one jurisdiction with same-sex marriage in every continent. 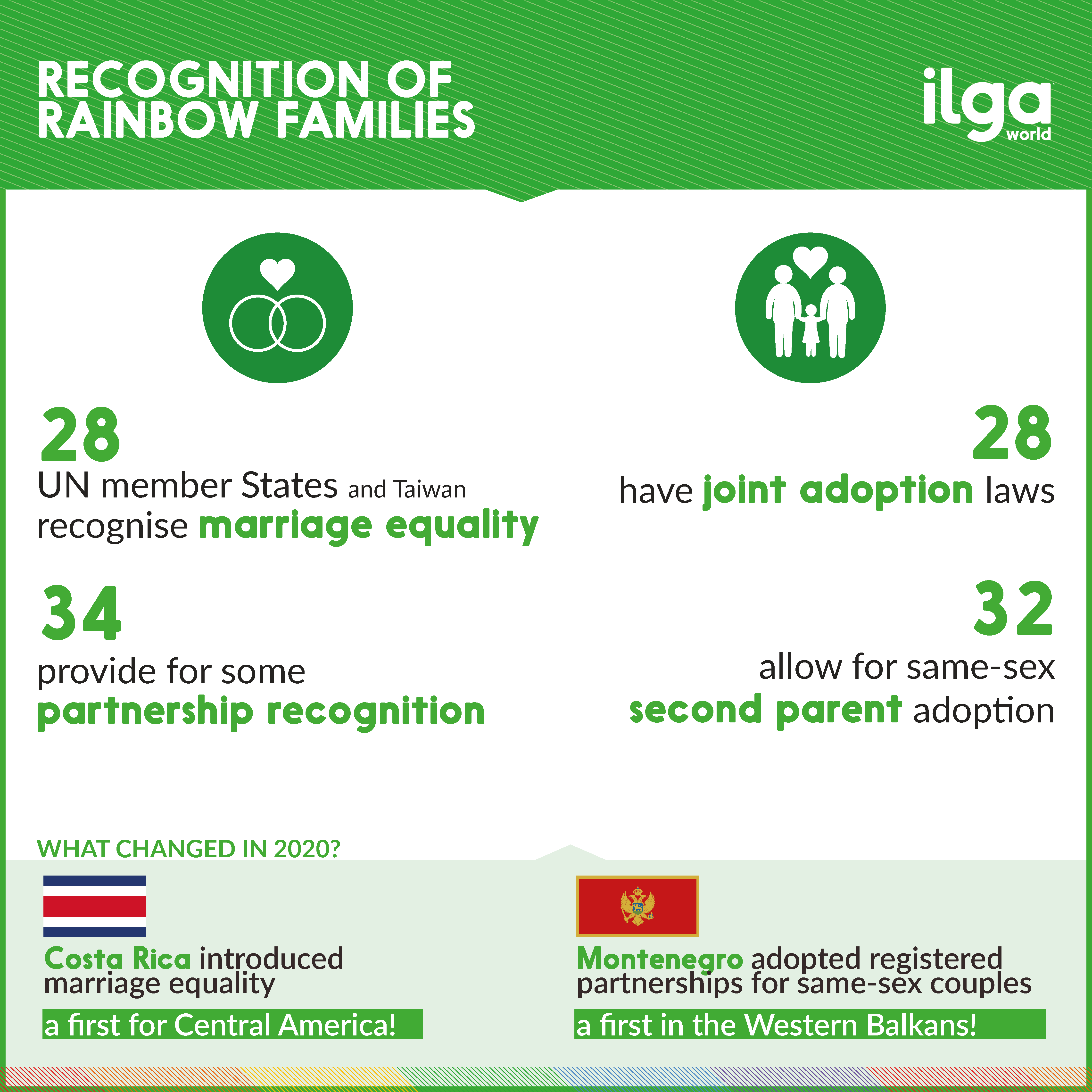 According to ILGA World’s State-Sponsored Homophobia report, 28 UN member States allow same-sex marriage, together with one additional non-UN member State and 30 non-independent territories worldwide. Voting papers sent to all Swiss citizens quote data from ILGA-Europe, our region working on Europe and Central Asia, show that 16 countries across the region already recognise marriage for all.

More than 20 years ago, the Netherlands was the first UN Member State to legalise same-sex marriage. Back in 2000, the idea of enjoying full equal marriage protections was not even in the dreams of most LGBT people, but today this is a reality in almost 30 countries. Soon after the Netherlands, Belgium (2003) and Spain (2005) followed suit while, in North America, Canada pioneered the quest for marriage equality, first at the provincial level and in 2005 at the national level.

In 2006, South Africa became the first (and thus far the only) African UN Member State to open marriage for same-sex couples. For its part, Argentina was the first country in Latin America eleven years ago (2010) and was soon followed by Uruguay and Brazil (2013), and later on by Colombia (2016). In Oceania, New Zealand joined the list in 2013 and was followed by Australia in 2017.  In Asia, Taiwan opened up marriage for same-sex couples in 2019.

All these amendments have been the result of the organised advocacy efforts carried out by civil society organisations in each country, regionally, and even internationally. Switzerland is not yet among these countries, but this may soon change.

Equal marriage put to a vote

The last step separating Switzerland from marriage equality is, in fact, the referendum.

This is not the first time in the world that the right to marriage is put to a popular vote, and there have been both favourable and adverse results when this is done. The US States of Maine, Maryland, and Washington (2012), as well as Ireland (2015) and Australia (2017) have gone through popular votes that crystallised the support of the population to move towards equal marriage through major victories.

Conversely, in at least two jurisdictions, adverse popular votes against marriage equality resulted in heavy blows to local LGBT communities in California (2008) and in Taiwan (2018). In these jarring defeats millions saw how their fellow citizens deprived them and their families of legal protection, often in the name of religion or tradition. The rights of minorities should not be subject to the will of the majority. Indeed, putting our rights to a vote can become a dangerous weapon against equality, unleash in the public debate a barrage of homophobic remarks that can evolve into hostility and outright violence, and even provide a platform to detractors and hate groups to boost and continue their anti-rights advocacy. Notwithstanding, resilience and determination of local movements led to the overcoming of these major setbacks, and these two jurisdictions now enjoy full marriage equality.

Marriage equality: do we need it, after all?

Paraphrasing the slogan of the marriage equality campaign, the answer can only be: “Yes, we do”. We all do. Moving forwards on the road to equality will have an impact on the lives of many people: on the couples whose families already exist but were not yet placed on an equal footing; on those who do not want to get married, but now have the option to make such a choice; on those who, growing up, will know that their love is recognised and respected, and doesn’t have to hide away. Eventually, marriage equality will have an impact on society as a whole: it won’t take away rights from anybody – it will just open these rights to more people. And more equality translates to fairer, more stable societies.

We know that this reality is very far from reach in many parts of the world.

In many countries, debates around marriage equality usually see detractors argue that by amending the definition of marriage, States would be altering one of society’s most basic and precious institutions, allowing for a novel form of social organising with unknown consequences.

However, we know that the institution of marriage remains the most comprehensive legal vehicle for the official recognition of a loving relationship. Although opening up such an institution does not automatically translate into full equality for all rainbow families - those with co-parenting arrangements, for example, or those where trans persons face additional hurdles in being recognised as parents according to their gender – we know that marriage remains the type of union that affords the largest number of benefits, rights, and duties.

To be clear, legalising same-sex marriage does not have the effect of allowing same-sex couples to form a family. These families already exist and have existed among us for decades, if not for centuries. The question is whether these families are effectively protected and recognised by the law on an equal footing or, on the contrary, left to their own devices. Additionally, by legalising same-sex marriage, States pave the way to not only protecting contracting parties, but also their children, in particular if LGBTI parenting and adoption rights are addressed and equalised as well. The regulation of parental obligations and responsibilities stemming from a legalised union between parents benefits the whole family unit and erases the stigma of belonging to a family regarded by the law as one of “lesser value”.

Over the past two decades, Switzerland has made great advances when it comes to respecting the rights of people of diverse sexual orientation and gender identity: it enacted the Registered Partnership Act in 2007; since 2018, it has allowed for stepchild adoption of couples living as registered partners or in de facto cohabitation; in 2020, it voted to include sexual orientation among the protected grounds against discrimination and incitement to hatred in its Penal Code; laws allowing for simplified legal gender recognition procedures will soon come into force.

Changes have happened, and there is room for more. Right now, Switzerland has only written “marriage equality” with a pencil trait. September 26 will be the day when this historic milestone could be either written in ink or erased from the books – leaving an entire community with no other choice but to continue fighting for their rights. Choosing respect, recognition, and equality – not in the future, but right now - would be a much easier and fairer solution.