Justice and recognition, violence and discrimination… it’s been a complex week for our communities across the world. Only this week, two men in Zambia were sentenced to 15 years in prison for consensual same-sex sexual activity, and one more member of the LGBTI community was killed in El Salvador. Good news came from Ireland - where the gender recognition process for trans people aged 16 and 17 will be simplified - and the United States, where PrEP will be available at no cost to people without prescription drug insurance coverage. In both cases, however, advocates speak also of missed opportunities. Meanwhile, in Australia, courts are restoring justice as they ruled in favour of four gay police officers in a workplace discrimination case, and an exhibition in Thailand is looking to raise awareness of our communities' issues through art.

The pair were initially sentenced in 2018, after staff at the hotel they were staying at reported them to the authorities.

The ruling has caused outrage from human rights defenders across the region. Pan Africa ILGA issued a statement to call on “the concerned arms of the Zambian government to challenge this homophobic and dated trajectory of their laws and the application of such laws.”

US Ambassador to Zambia, Daniel Foote, also controversially spoke out on the issue, later reportedly receiving threats for his remarks.

Zambian President Edgar Lungu has defended his country’s stance against homosexuality, and called on the US to reign in the ambassador for his comments.

In a move that may curb a vital avenue for all human rights defenders and civil society organisations to obtain justice, the government of Tanzania has withdrawn the right of NGOs and individuals to directly file cases against it at the African Court on Human and Peoples’ Rights.

The U.S. government will start a national HIV prevention program that will distribute free HIV pre-exposure prophylaxis medication, or PrEP, to uninsured Americans at risk of acquiring the virus, the Department of Health and Human Services announced Tuesday. Activists, however, say the plan doesn’t go far enough. Find the full story at www.nbcout.com

USA: PrEP to be made freely available to people without insurance

The United States Department of Health and Human Services has announced a nationwide scheme to allow for the free use of Pre-Exposure Prophylaxis (PrEP) to certain vulnerable groups. PrEP is a vital drug in the prevention of HIV infection.

Under the plan, PrEP will be available at no cost to people without prescription drug insurance coverage. However, as NBC Out reports, the program does not cover the blood work required for PrEP, which advocates call “a barrier to PrEP access.”

“The Trump administration recognises the vital role of prevention in ending the HIV epidemic in America,” said Health and Human Services Secretary Alex Azar, “and connecting members of vulnerable communities to prevention services and medication is an important part of the president’s initiative.”

However, in President Trump’s World AIDS Day speech, no mention was made of the countless LGBT+ persons historically and presently affected by the epidemic.

The Governor of Utah, United States has announced that his will be the 19th state in the United States to ban ‘conversion’ therapy for LGBT persons under the age of 18, after receiving approval from the Church of Jesus Christ of the Latter-Day Saints and other stakeholders.

A teacher in Utah, United States was fired after a homophobic tirade against one of the pupils, who marked Thanksgiving in front of the classroom by expressing gratitude as he would have soon be adopted by his two dads.

A 28-year old member of the LGBT community, identified as D. Granados was murdered on Saturday 30 November while alone at home in Loma Larga canton, municipality of La Unión.

Local authorities said that they will not rule out the possibility that the attack was a hate crime.

According to ILGA World member organisations Comcavis-Trans, more than 600 members of our communities have been murdered in El Salvador since 1993 - eight only in the past year.

Such hate crimes particularly seem to have increased over the past two months, leading the United Nations system in El Salvador to call on the “national authorities who are charged with investigating these crimes that they punish those responsible, and take urgent measures to prevent more acts of violence based on prejudice and hate towards the LGBTI community”.

A report on the situation of LGBTI people in the country has been delivered to Flávia Piovesan, Rapporteur on the Rights of LGBTI Persons for the Inter-American Commission for Human Rights, on her recent visit to the country, and the National Health Forum has organized the first meeting dedicated to protecting our communities in the country from violence.

Organisations from across the world are mourning the death of of LGBTI human rights defender Charlot Jeudy, and are calling on Haiti to investigate the sudden death. Human rights groups in the country have recently reported “unprecedented violence and attacks against people based on their perceived sexual orientation and gender identity”.

A study has found that people of diverse sexual orientations and gender identities in Nicaragua are disproportionately affected by violence. 54.9% of LGBT+ participants claiming to have been the victims of some form of sexual or psychological violence from strangers in the street and relatives alike, with treatment for the violence remaining rare.

Ireland: gender-recognition process for trans 16- and 17-year olds to be simplified

Organisations, however, have highlighted how the report missed the opportunity to create “a clearer pathway for legal gender recognition for trans people under the age of 16” and to “legally recognise non-binary identities”.

In 2015, Ireland passed a law allowing trans citizens to self-declare their gender identities, without having to first obtain approval from courts, medical practitioners and psychologists. In 2018 the law came under review, with various stakeholder organisations engaging with the government and putting forward recommendations on how to expand and improve the Gender Recognition Act.

“One of the main findings of the Review Group was that the current legislation is too onerous for children aged 16 and 17 years, as it involves a court process and certification by two medical practitioners,” said Doherty in a public statement.

Several local advocacy organisations have congratulated Doherty and the Irish government on this step, though have expressed disappointment that the reforms do not go far enough.

“While welcoming the proposed amendments, we are deeply disappointed that the Government did not take this opportunity to implement all the recommendations in the Review Report furnished to Minister Doherty in June 2018,” said the Transgender Equality Network Ireland (TENI) and BeLonG To Youth Services through a joint press statement.

Both organisations also expressed disappointment in the continued lack of a gender-marker option for non-binary people: “Families, schools and medical professionals across Ireland are already offering care to transgender and non-binary individuals: we need the Government to show the same commitment.”

The European Parliament held a debate on public discrimination and hate speech on LGBTI people in presence of the Commission. The debate focused especially on the situation in Poland, where 87 localities have passed bills or have declared themselves “LGBT-free” or “free of LGBT ideology” since the beginning of 2019.

Ahead of the International Day of Persons with Disabilities, ILGA-Europe engaged  with 11 D-deaf and disabled persons from across Europe in a two-day meeting in Brussels, Belgium to better understand how the LGBTI movement can be made more inclusive and accessible to all.

Four gay police officers in Sydney, Australia, are seeking compensation after winning a case brought against a superior officer for discrimination. The four men were reported to the Professional Standards Command by Supt. Simon Hardman to undergo drug testing due to his concern that the four officers often frequented a local gay nightclub.

Hardman, who no longer works for the Sydney Police, claimed the officers were “notorious for their promiscuity,” and that “drug use is thought to be fundamental in such indiscriminate sexual encounters.”

The NSW Civil and Administrative Tribunal on Friday ruled that the superior officer was “motivated, consciously or unconsciously, to make the complaints [...] by reason of their homosexuality”. However, despite all four testifying that they had heard homophobic slurs and comments by other police officers on numerous occasions, the tribunal did not rule that the Sydney Police Force had a “culture of bullying and harassment”.

Rugby player Israel Folau has reached a confidential settlement with Rugby Australia and the New South Wales Waratah after being expelled from the organisation for making homophobic remarks and refusing on multiple occasions to apologise.

The Australian Senate has passed a motion calling on the government to recognise the increased risk it has placed on two gay Saudi journalists by keeping them in detention after they claimed asylum last month.

More than 50 artists of diverse gender identities and sexual orientations from across Asia are having their work displayed in Bangkok’s Art and Culture Centre. The exhibition, entitled “Spectrosynthesis II”, is reported to be the largest of its kind in the region, and follows a similar event that took place  in Taipei, Taiwan in 2018

Organised by the Sunpride Foundation, which was created five years ago to raise awareness for LGBT issues through art, the exhibition “addresses sex and sexuality, which is sometimes difficult to speak about in certain societies,” said curator Chatvichai Promadhattavedi.

“It’s a rare show. We hope people will become more open-minded through art.”

Over 190 000 people in China, most of them same-sex couples, have been petitioning the government through a mass letter-writing campaign to legalise marriage equality. The demand is unlikely to sway the government in the immediate future, say some local activists. 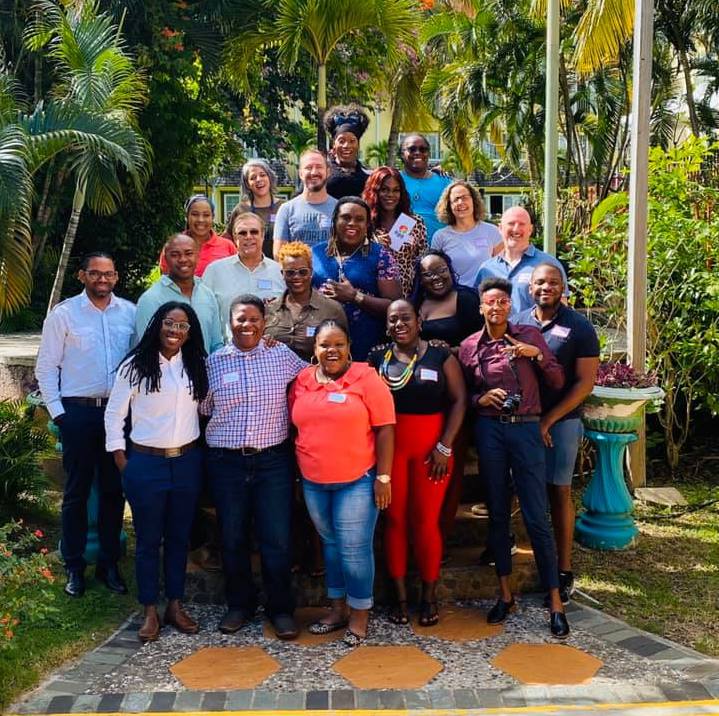 Human rights defenders met in St Lucia to discuss how English and Dutch-speaking activists from the Caribbean can
participate more directly in the spaces of ILGA and The Commonwealth Equality Network (TCEN).
We thank ILGA North America and TCEN for hosting such an important dialogue!