Skip to main content
Qatar and LGBTQ human rights: an overview ahead of the World Cup
Submitted by Emilia Alejandr... on Wed, 11/09/2022 - 13:15
News tags:
Qatar
sport

The human rights of LGBTQ people have been at the centre of the debate over the upcoming Men’s World Cup in Qatar in recent weeks.

The mere fact that the sporting event was going to be organised in a country with laws criminalising people with diverse sexual orientations, gender identities and expressions (SOGIE) has contributed to put a spotlight on the human rights violations that the LGBTQ community faces in Qatar.

Moreover, the lack of clarity from the organisers on the risks LGBTQ people – be they participants in the World Cup, football supporters, journalists and others working on the World Cup, or the local community – might face during the event has further contributed to the necessity of raising awareness on this issue before an international audience.
However, there are also concerns that attention on the issue carries the risk of a potential backlash against LGBTQ people on the ground - once the World Cup will be over and the international attention will have turned elsewhere.

Here is an overview of the state of the human rights of LGBTQ people in Qatar, ahead of the 2022 World Cup. 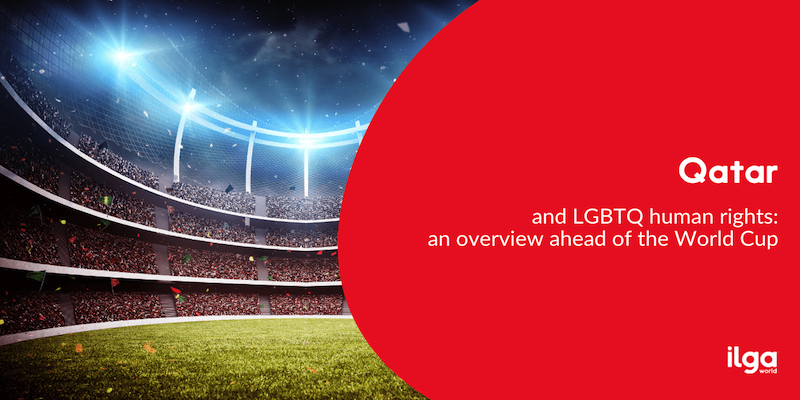 A photo of a lit-up stadium, full of supporters.
Text in a rounded frame reads: "Qatar and LGBTQ human rights: an overview ahead of the World Cup".
The ILGA World logo sits at the bottom right of the image

In Qatar, same-sex sexual activity is prohibited under multiple parts of the Penal Code - most notably article 285 - which criminalise acts of “sodomy” and “sexual intercourse” between people of the same sex with up to seven years in prison. Article 298 criminalises “sodomy as a profession or for a living” with imprisonment for a term up to ten years. Additionally, under Sharia law, it is technically possible that Muslim men could face the death penalty for same-sex sexual activity.

In March 2022, a Qatar delegation denied before the United Nations Human Rights Committee that capital punishment is applied for consensual same-sex sexual acts. However, as ILGA World has stated in previous reports, it is still unclear as to how Sharia law is effectively applied and to what extent the crime of “zina” might be punished by the death penalty. No individuals are known to have been executed on the grounds of their SOGIE in recent decades.

According to ILGA Asia, it seems less likely that the death penalty would be imposed on visiting World Cup fans. Nevertheless, the question of what would happen to the local population during and after the World Cup remains uncertain.

Beyond the criminalisation of consensual same-sex sexual acts, couples have no form of legal protection or recognition.  Qatari citizens can legally change their names, but not update their gender marker on official documents. Based on law, the government can prevent LGBTQ people from entering the country or deport LGBTQ people from Qatar on the grounds of their sexual orientation and gender identity. Issues such as hate crimes or employment discrimination on the basis of SOGIE have no special protection or prohibition under Qatari law.

In recent cases documented by Human Rights Watch, six LGBT people claimed to have been arbitrarily detained and subject to ill-treatment by Qatari Preventive Security Department forces as recently as September 2022.

Their testimonies declared they were subjected to physical abuse, denied access to legal counsel and medical care, and had confessions forcibly extracted from them. All were detained without charge, and received no record of having been detained.

Security forces had arrested them in public places based solely on their gender expression and unlawfully searched their phones. As a requirement for their release, security forces mandated that trans women detainees attend ‘conversion therapy’ sessions at a government-sponsored “behavioural healthcare” centre.

Similar cases have been reported previously as well: in its Our Identities Under Arrest report, ILGA World documented cases when criminalising laws had been enforced as early as 1995, when a US citizen was sentenced to six months’ imprisonment and 90 lashes for alleged “homosexual activity”. In 1997, 36 gay Filipino migrant workers were deported from the country on account of their sexual orientation, and in 2013 Qatar was one of the countries in the Gulf Cooperation Council that was exploring a ban on LGBT foreigners from working in the region. Some analysts have suggested that Qatar backtracked on this decision only as a result of significant international criticism, in light of a potential boycott of the 2022 football World Cup.  In 2016, an 18- year-old-gay social media influencer from Poland was in jail for almost two months, and his arrest had not been recorded for 10 days.

The arbitrary arrests and detentions that have occurred in Qatar are based on a law allowing for provisional detention without charge or trial for up to six months, if “there exist well-founded reasons to believe that the defendant may have committed a crime,” including “violating public morality”, according to ILGA Asia.

Legal barriers to freedom of expression

Moreover, the Law on Consumer Protection (2008) states that a consumer has the right to have their "religious values, customs and traditions" respected. This provision was cited to justify the confiscation of rainbow-coloured children's toys from a number of local shops in December 2021, in news that made headlines worldwide.

This year, Major General Abdulaziz Abdullah Al Ansari was reported as saying that while LGBTQ persons "would be welcome at the World Cup hosted in Qatar that year", any displays of rainbow flags would be taken down by authorities, ostensibly to prevent the visitors from being assaulted by members of the public.

There have also been several cases of censorship of mainstream and other media for including or mentioning content related to SOGIE issues in Qatar. In recent years, movies such as Disney's Doctor Strange or West Side Story have been banned. In 2018, nine articles related to gay and transgender rights in the print version of the New York Times were censored.

ILGA World was unable to confirm the specific legal basis on which the authorities rely for these official acts of censorship. However, it is important to note the existence of the “Press and Publications Law”, which allows the Qatari government to revoke a publication if its policy is deemed "not in the national interest". Sherif Mansour, from the Committee to Protect Journalists in the Middle East and North Africa, said that this law has caused a “self-censorship” in which publishers remove possible controversial content for fear of suffering consequences with the government. In 2020, the penal code was also amended to authorise the imprisonment of “anyone who broadcasts, publishes, or republishes false or biased rumours, statements, or news, or inflammatory propaganda, domestically or abroad, with the intent to harm national interests”.

Over the past few months, different authorities have issued conflicting information about what would happen to the LGBTQ community during the World Cup. For example, regarding the use of the rainbow flag during matches, Qatari authorities have expressed that they would respect FIFA's guidelines on this matter, also saying that they are open and welcoming of differences in people's cultures. However, they have also stated that they expect attendees to "respect our culture."

As noted by Human Rights Watch, FIFA has adopted the UN Guiding Principles on Business and Human Rights, which require it not only to avoid infringing human rights, but to take appropriate measures to prevent, mitigate and remedy negative human rights impacts.

FIFA has developed a Sustainability Strategy for the World Cup, which however falls short of meaningfully  mentioning the rights of LGBTQ persons and including them into the human rights policies developed for the event. Despite the word of an independent human rights working group ahead of the event, the human rights of LGBTQ persons have been side-lined from the conversation, Simple reassurances that LGBTQ persons would be welcomed at the World Cup cannot be considered as commitments, especially after FIFA’s recent invitation to “focus on the football”.

The LGBTIQ+ Human Rights Sports Coalition, of which ILGA World and ILGA Asia are members, has had a series of meetings with FIFA and the Qatar Supreme Committee (SC). As part of the meetings Qatari security forces were tasked to submit to them a protocol and guidelines on how they will deal with LGTBQ issues during the period of the World Cup, but it has not been supplied. The SC has also stated that they have conducted training for police forces to ensure sensitivity towards the LGBTQ community, but did not provide further information on how the training was conducted and its content.

According to the LGBTIQ+ Human Rights Sports Coalition, the SC - which is in charge of organizing the World Cup - has privately said that laws criminalising same-sex relationships will be suspended during the World Cup period until early 2023 as part of what is known as the "enabling law." Details of the "enabling law" has not been made public, and the impact it may have on LGBTIQ rights is not known. However, the leak of a brief summary document from within Qatari government has revealed some areas of leniency.

Recommendations for journalists while reporting on LGBTQ issues in Qatar 2022

Lesbian, gay, bisexual, trans, and queer people have the right to fair, accurate and inclusive reporting of their life stories and concerns. As with all members of society, the media should treat them people with fairness, integrity, and respect. Here are some additional recommendations, taking into account the context of Qatar.