Geneva, 15 December 2021 – Arrests and prosecutions for consensual same-sex sexual acts, or for diverse gender expressions, have continued unabated across the world in 2021 and in previous years, a new report by ILGA World revealed today.

ILGA World reviewed hundreds of cases over the last two decades in which law enforcements subjected LGBT and gender-diverse persons to fines, arbitrary arrests, prosecutions, corporal punishments, imprisonments and more – up to (possibly) the death penalty. The actual numbers, however, may be much higher:  many cases may have never been formally registered, and oftentimes formal records are inaccessible or non-existent.

Download the Our Identities under Arrest report
in English - in Spanish

“To date, around one third of United Nations member States continue to criminalise consensual same-sex sexual acts between adults”, said Kellyn Botha, research consultant at ILGA World and author of the Our Identities Under Arrest report. “Governments often dismiss these provisions as ‘dormant regulations’, but laws never really sleep. This report provides plenty of evidence of how criminalising provisions have targeted our communities worldwide, at times coming back to life after years spent as a mere threatening presence on the books. The unpredictable nature of their enforcement makes LGBT and gender-diverse people live perpetually under threat, excluding them from an equal participation in society”.

In numerous instances, non-conforming and diverse gender expressions appear to be a central element triggering arrests – even when legislation doesn’t target them explicitly.

“In societies where non-normative behaviour is largely read as evidence of non-heterosexuality, the way a person looks, dresses and talks can often be seen as indicative of probable ‘criminal activity’, and be enough to warrant an arrest”, said Lucas Ramón Mendos, research coordinator at ILGA World. “In many jurisdictions, it is far more likely for someone to be targeted for their appearance or mannerisms than for any verifiable illicit activity”.

Raids, arbitrary searches, online entrapment by security forces, and tip-offs in hostile environments are among the most common ways in which targeting begins. 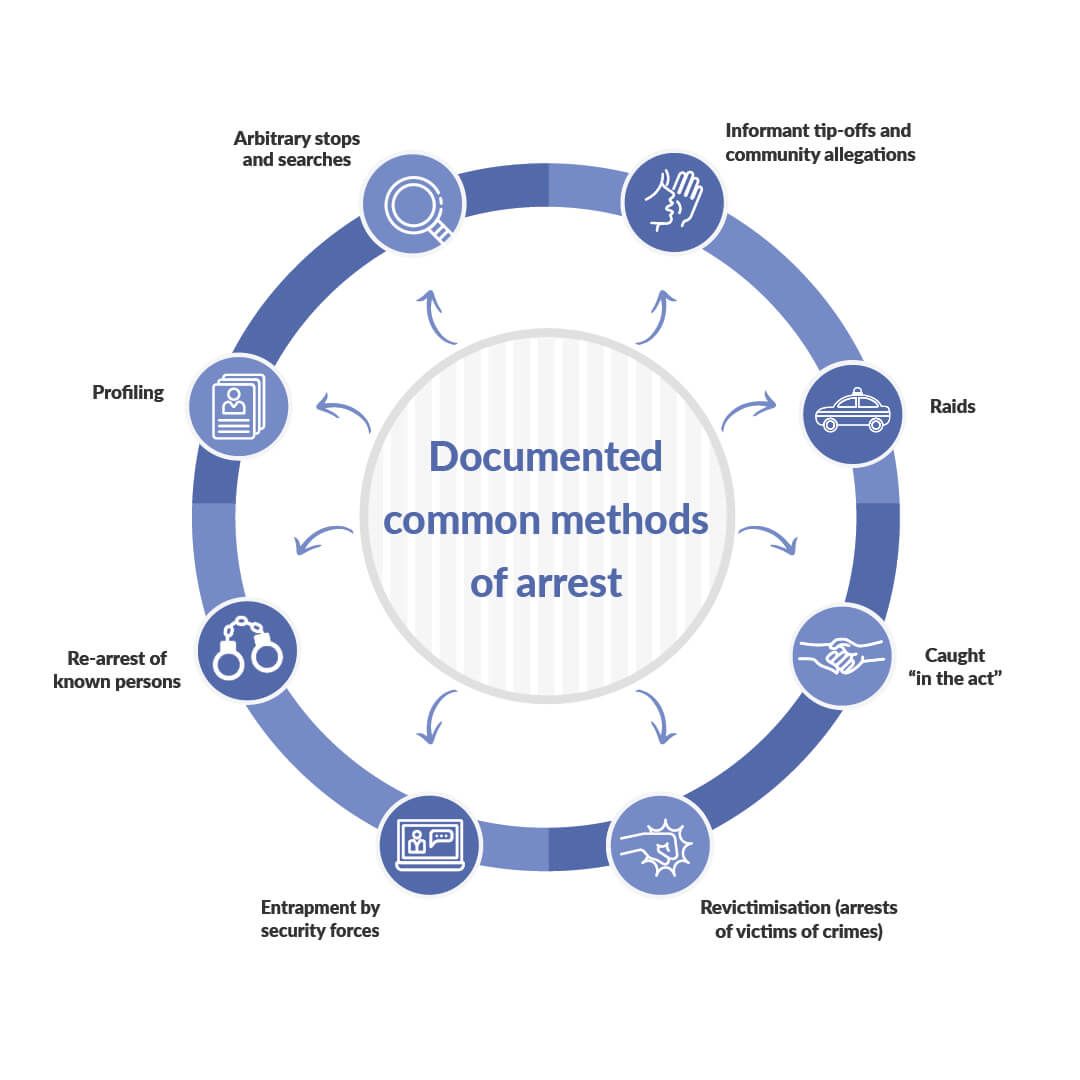 “Laws criminalising consensual same-sex sexual acts or diverse gender expressions, as well as other less explicit provisions, represent a constant threat”, points out Julia Ehrt, executive director at ILGA World. “This is true not only for our communities on the ground, but also for those seeking asylum after having managed to flee hostile environments. Claims that a law is rarely enforced are simply not enough to make a country safe for those who nevertheless are in danger of persecution there.”

Looking beyond the black-letter law, the real human stories of how people are affected by criminalising regulations emerge as a strong call for those in power to stop violence against marginalised communities. This is especially true as we consider the countless other cases of criminal enforcement that went unreported or missed in the maelstrom of public records.

“There is a vital need to continue this research work”, conclude Luz Elena Aranda and Tuisina Ymania Brown, co-secretaries general of ILGA World. “We need to cast a light on how criminalising laws affect millions of people, and to give voice to those pained masses who have been silenced by prejudice and by those in power”.

Our identities under arrest – Main findings