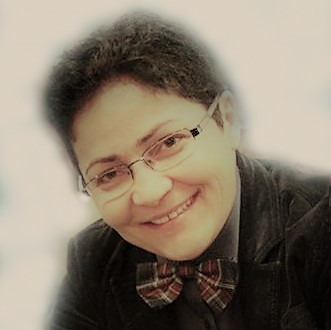 Shadi Amin (she/her; they/theirs), a pioneering and influential Iranian LGBTI activist, is the coordinator of Iranian Lesbian and Transgender Network (6Rang). 6Rang is a community dedicated to serving LGBTI Iranians whereby Shadi seeks to raise awareness about human rights violations on grounds of sexual orientation and gender identity or expression. Shadi is also a leading writer and researcher in her field and has authored and co-authored numerous authoritative books and articles.

Shadi’s selection and translation of Adrienne Rich and Audre Lorde's articles, published in Ghodrat va Lezzat (Power and Joy, 2006), was one of the first among her literary works and one of the few resources available in Farsi on lesbian existence. She is also the co-writer of Crime and Impunity: Sexual Torture of Women in Islamic Prisons (2012). Another one of her publications is Gender X: a Farsi book written based on the findings of a three-year research about LGBTI individuals and the abuse of their rights in Iran. The English version of the report on this research is available under the title of Diagnosing Identities, Wounding Bodies.

In 2010, Shadi led Iranian members of the lesbian and transgender communities in creating the 6Rang network which offers peer support and raises awareness in the larger society. Another unique contribution from Shadi is the “No to Forced Sex Change” project, which documents the medicalization of gender identity.

Shadi has also taken the initiative to set up an alternative counseling e-system, which methodically informs, educates, supports and assists LGBTI Iranians. Through this effort, she is changing the status quo and creating opportunities for a better life for thousands of Iranian LGBTI at the grassroots level under the Islamic Republic regime in Iran—a government intent on denying LGBTI individuals’ very existence.
Shadi works with UN Mechanisms such as Treaty Bodies, Special Rapporteurs and the Universal Period Review to defend the rights of LGBTI people in one of the most stigmatised regions in the world.