A month into 2022, our communities face new and old struggles as we keep fighting for more equality in our societies around the globe. Yet too often, LGBTI persons struggle for simple survival. In Afghanistan, people who don’t conform to rigid gender norms and heteronormative standards have been living in fear, as the Taliban rule aggravated their already precarious situation. Meanwhile, two resolutions adopted by the Council of Europe rung the alarm on how our rights are at risk in too many member States. In the United States, a report highlighted how trans people have been three times more likely to face food insufficiency during the pandemic.

The Inter-American Commission of Human Rights issued a resolution granting precautionary protection measures in favor of an intersex adolescent in Colombia. In Botswana, the President met with LGBTI activists vowing to respect the landmark ruling that decriminalised consensual same-sex sexual activity between adults in the country.

While we continue working to advance equality worldwide, we won’t forget the people we lost along the way. After over thirty years, a suspect has been charged and pleaded guilty in Australia for the 1988 murder of Scott Johnson, a gay 27-year-old man.

Thread on some of the heartbreaking stories we heard from #LGBT Afghans while researching our new report: https://t.co/5VbKDuVy89

LGBT Afghans have faced an increasingly desperate situation since the Taliban took over the country, Human Rights Watch and OutRight Action International said in a recent report.

Alongside people who don't conform to rigid gender norms, LGBT persons in Afghanistan are subject to constant threats to their safety and lives.

Many reported that Taliban members attacked and threatened them. Aggressions came also from family members, neighbours, and partners – either because they now support the Taliban or felt they needed to act against close LGBT people to protect themselves.

“We spoke with LGBT Afghans who have survived gang rape, mob attacks, or have been hunted by their own family members who joined the Taliban, and they have no hope that state institutions will protect them,” said J. Lester Feder, senior fellow for emergency research at OutRight Action International.

“For those LGBT people who want to flee the country, there are few good options; most of Afghanistan's neighbours also criminalize same-sex relations. It is difficult to overstate how devastating – and terrifying – the return of Taliban rule has been for LGBT Afghans.”

In South Korea, 30 organisations called for the passage of anti-discrimination law in an open letter to the National Assembly.

Following a Supreme Court ruling, Israel lifted restrictions that barred same-sex couples and single men from becoming parents through surrogacy within the country.

A married couple of two men became the first in Taiwan to legally adopt a child to whom neither of them is related, challenging local laws in court.

Nearly all Japanese public high schools will soon remove the gender field from their application forms.

The province of Bataan joined the local governments in the Philippines that adopted an ordinance prohibiting discrimination based on sexual orientation or gender identity and expression.

An Iranian activist, Zahra Sedighi-Hamadani, has been arbitrarily detained since last October because of her perceived sexual orientation and gender identity and for speaking up in defence of LGBTI rights.

In a landmark meeting with LEGABIBO representatives, Botswana President Mokgweetsi Masisi has vowed to protect LGBT persons' human rights, and to fully implement the recent historic court ruling that upheld the decision to  decriminalise same-sex intimacy between consenting adults

As AfricaNews points out, five years ago the human group had to go to court to circumvent a government ban on its existence. In 2019, the court in Botswana's capital, Gaborone, ordered that laws punishing same-sex relationships be amended, calling them "relics of the (British) Victorian era" that "oppress a minority."

“Please know for the record, you are fully embraced. Fear not, my job is to protect you and everybody else,” said Masisi during his meeting with the human rights organisation.

“We do applaud you for being the first president to openly and freely highlight that people in same-sex relationships in our country do exist and that there are those who are violated and have suffered,” said Thato Moruti, LEGABIBO chief executive officer. Moruti defined the meeting as a “step in the right direction”.

The High Court of Namibia ruled against two same-sex couples fighting for recognition of their marriages. The judges, however, said, had words of support for the couples, but claimed to be bound by a more than 20-year-old Supreme Court ruling saying Namibia does not recognise same-sex relationships.

During the pandemic, transgender adults in the U.S. were three times as likely as cisgender people to experience food insufficiency, according to a new @williamspolicy study. pic.twitter.com/KppRktOyS7

Trans people in the United States have been three times more likely than cisgender people to face food insufficiency during the Covid-19 pandemic, a recent report by the Williams Institute has indicated.

Using data collected by the U.S. Census Bureau on the Household Pulse Survey, the study found that 25.3% of trans adults reported “sometimes or often” not having enough to eat in the last seven days, compared to 8.3% of cisgender adults.

According to the study, “this disproportionality is consistent with higher rates of poverty and unemployment among transgender versus cisgender people observed as noted in prior research. Food insufficiency was also far more common among transgender people of color and those with a high school education or less as compared to those who are White, cisgender, and have more formal education—paralleling population patterns of poverty and marginalisation.”

In addition, almost twice as many trans people reported other barriers to accessing food, including that they could not get out to buy food and safety concerns.

In the Cayman Islands, LGBT activists met authorities to address the implementation of anti-discrimination laws.

In Canada's British Columbia, people will no longer need a letter from a doctor or a psychologist to update thier gender markers on a birth certificate.

More than 500 major corporations in the United States have now joined a coalition calling for the Senate to pass the Equality Act, and provide non-discrimination protections for LGBTQ people at the federal level.

ACON sincerely hopes that today's guilty conviction of the man involved in the murder of Scott Johnson goes a long way in providing solace, peace and resolution to Scott's family and friends.

A man pleaded guilty to the murder of Scott Johnson over thirty years since his death was dismissed as suicide.

The 27-year-old student was found dead in 1988 at the base of a cliff near Manly’s North Head. Later on, an inquest determined Johnson had taken his own life. His family rejected the findings, demanding a full investigation. In 2017, a coroner ruled he died because of homophobic violence. A 49-year-old man has now been charged with murder and pleaded guilty.

“The deaths and disappearances of gay men and transgender women and the epidemic of violence in Sydney and NSW during the 1970s to 1990s has left a traumatic legacy,” ACON said in a statement. “There were dozens more cases from this time, and many remain unsolved leaving dozens of families and loved ones without answers or resolution.”

An emergency fund has been created to support the Tonga Leitis Association in providing humanitarian relief to the LGBTQI community, after the massive underwater volcano and tsunami that has hit Tonga.

According to recent data, LGBT people in Aotearoa New Zealand face disadvantages in housing and income.

The rights of LGBTI people within the Council of Europe (CoE) are at risk, the Parliamentary Assembly stated in two resolutions, calling on States to ensure their protection.

The Rising hate against LGBTI people in Europe report took a stance against the “extensive and often virulent” anti-LGBTI hatred occurring in CoE member States. In particular, the report addressed attacks against LGBTI rights in Hungary, Poland, the Russian Federation, Turkey, and the United Kingdom.

According to Fourat Ben Chikha, General Rapporteur on the rights of LGBTI people at the Council of Europe, this worrying trend is not “an expression of individual prejudice, but the result of sustained and often well-organised attacks” and cannot be combated if treated as an “individual phenomenon”.

At the same time, the Alleged violations of the rights of LGBTI people in the Southern Caucasus resolution called on Georgia, Armenia, and Azerbaijan to protect LGBTI persons and their safety. The report followed years of attacks against LGBTI activists, Pride marches and other public events in the region.

European countries are lifting and easing restrictions on blood donations from men who have sex with men. While Ireland will initially reduce the deferral period to four months, France and Greece have scrapped the ban entirely and the new provisions will soon come into force.

Around 125 German LGBT Roman Catholic priests and employees came out while launching a campaign for the end to institutional discrimination against queer people in the Church.

More people in the United Kingdom will be eligible for a pardon for historical criminal convictions relating to same-sex activities between consenting adults.

In the United Kingdom, the Scottish government published a three-year strategic action framework to improve access to and delivery of health gender identity services.

The Inter-American Commission on Human Rights (IACHR) has issued a resolution in favour of a Colombian intersex teen who had been facing obstacles in accessing vital medications and healthcare.

The IACHR noted that the 16-year-old had had no access to specialist and multidisciplinary care, and that the provision of vital prescribed medication had been delayed.

The Commission issued a precautionary protective measure, asking Colombia to ensure she has access to timely medical and psychological care. Such care should meet international standards, including those concerning intersex persons and the adolescent’s free, prior, and informed consent.

In the resolution, the Commission underlined the need for an intersectional, human rights perspective: the teen should learn about intersexuality “in an environment free of discrimination, so that she can participate in medical decision-making independently of prejudices and stigmas about bodily diversity”.

A group of lawmakers in Guatemala has advanced a bill that would stigmatize trans and non-binary identities, and prevent children and adolescent's right to inclusive education and health. Activists on the ground have launched a petition calling on the bill to be rejected.

People born in Mexico can now request and receive amended birth certificates at any country’s consulate.

(trigger warning: graphic description of murder) A lesbian couple was killed in the Mexico's state of Chihuahua. Two suspected were later arrested, and charged with “aggravated femicide”.

In Argentina, two trans women were killed in the first two weeks of 2022. 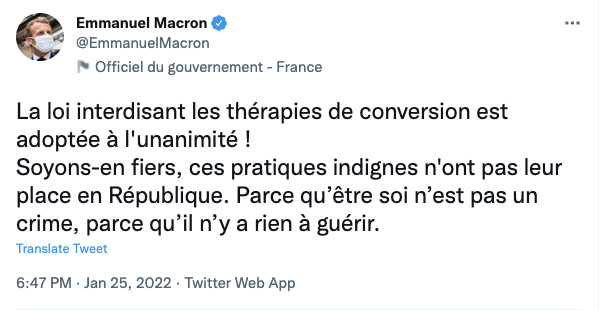 “The law prohibiting conversion therapy is adopted unanimously!”, the country’s President Emmanuel Macron tweeted. “Let's be proud, these unworthy practices have no place in the Republic. Because being yourself is not a crime, because there is nothing to be cured.”