Although not everything is roses, sometimes we have a lot to celebrate! This week some of the biggest news reflected the progress, resilience, and love within our communities. In Hong Kong, a ban on allowing same-sex couples from accessing public housing has been declared unconstitutional. In South Africa, famed human rights defender Desmond Tutu has been honoured with a Lifetime Achievement Award for his work with the LGBTI community. In Mexico a group of activists held a kiss-in to protest against homophobic staff at a shopping centre, while the Cook Islands are due to hold a Pride Day celebration - a reported first!

Even large institutions have announced major advances this week: in the United States, the American Psychological Association amended some of its outdated policies affecting our communities, and the European Commission published an LBTI-inclusive gender equality strategy setting out key actions for the next five years.

The European Commission has presented its gender equality strategy, setting out key actions for the next five years. Among them, the document includes ending gender-based violence and stereotypes, ensuring equal participation and opportunities in the labour market, and achieving gender-balance in decision-making and politics.

As ILGA-Europe pointed out, the document is “strongly inclusive of women in all their diversity, and clearly recognises LBTI women”.

“Equality is an infinite resource, and there is enough of it for everyone”, Commissioner for Equality Helena Dalli pointed out. “On the flipside, discrimination costs the individuals that suffer it and society as a whole dearly, in lack of personal recognition, lack of meritocracy and loss of talent and innovation. With the Gender Equality Strategy we are anchoring gender equality at the core of EU policy development”.

While welcoming the document, ILGA-Europe invited the Commission to work together and set out specific initiatives to ensure that “the realities of LBTI women are fully taken into account and intersectional discrimination addressed.”

“More research is for example needed on the higher rates of violence experienced by LBTI women, and all measures tackling gender-based violence need to take LGBTI-phobia into account as an additional factor.”

As part of a wider set of planned constitutional reforms, the Russian Federation will reportedly consider introducing a clause to establish the concept of the family as a “union of a man and a woman”.

A gay couple in Azerbaijan has been facing death threats after a video of the two sharing a kiss had gone viral on social media.

An activist in Turkey won the lawsuit she had filed for police violence after being detained during the 2017 LGBTI Pride Parade in Istanbul. Law enforcement has been ordered to pay compensation for the incident.

New data from the Western Balkans found that men who have sex with men and members of the LGBT community remain among the most disproportionately affected by new cases of HIV infections.

In Malta a proposed bill to decriminalise sex work would see the so-called ‘Nordic Model’, which criminalises sex workers’ clients, dropped in favour of full decriminalisation.

The Hong Kong government’s policy of denying public housing to legally married same-sex couples has been ruled unconstitutional by the High Court. This comes after a low-income couple were told they were not eligible to apply for an apartment, due to the policy defining a family as consisting of a “husband and wife, parent and child, [or] grandparent and grandchild”.

Hong Kong faces a severe shortage of low-income housing and currently the average waiting time for family applicants is of over five years - with 151,900 applications in line. The plaintiffs’ legal team had found that they had met all the requirements to be considered, but authorities maintained that allowing same-sex couples to apply would further limit housing availability for ‘traditional’ families.

Justice Anderson Chow Ka-Ming, however, noted that authorities could not justify treating the couple differently, and that the policy “resulted in an unacceptably harsh burden on same-sex couples lawfully married overseas”.

The prosecuting lawyer added that the “judgment will have a real and positive impact on the lives of low-income LGBTI people in Hong Kong”, though the couple in question has expressed frustration at the slow pace of change. “How many judgments against the government does it take”, they said, “before the government stops relying on discriminatory policies and introduces LGBTI discrimination legislation in Hong Kong?”.

The High Court of Israel struck down a law which blocked gay and single men from recurring to surrogacy to become parents, and gave the legislature one year to pass a new law.

A band in Malaysia has come under fire for releasing a song calling for the murder of LGBT persons.

The 5th International Intersex Forum, to be hosted in Thailand, has been postponed to September due to concerns over the spread of COVID-19 (Coronavirus).

Cook Islands: in a reported first, Pride Day celebrations to go ahead

On 27 March, in a reported first, the Cook Islands will hold a Pride Day to raise visibility for local rainbow communities. According to reports, this will be the first Pride celebration in the Cook Islands' history, where same-sex sexual activity is currently criminalised. The matter of decriminalisation is set to be heard in Parliament in June.

Spokesperson for Pride Cook Islands, Karla Eggelton, said that Pride Day will help raise understanding and acceptance for people with diverse sexual orientations and gender identities in the run up to the parliamentary debate.

The community event, organised by local advocacy group Te Tiare, is planned to be free for all ages and have a wide range of games, educational events and interactive stalls.

“Pride Day creates a rainbow-filled space for LGBT+ people to proudly come together with friends, family and supporters to enjoy a fabulous range of activities,” said Eggelton. “Our country’s having an important conversation right now about decriminalising same-sex relationships. Let’s not lose sight that ongoing discrimination impacts real people. We’re your family members, your friends, your workmates, neighbours and customers. We’re a part of everyday life and we’re proud of who we are.”

In Australia 1000 volunteers will come together to form the shape of a house to raise awareness of homelessness. According to recent research, LGBT young people in the country are twice as likely as their straight or cisgender peers to experience homelessness.

A pregnant lesbian woman was verbally abused by a stranger in a supermarket in Brisbane, Australia, in a week marred with several more reported lesbophobic incidents across the world.

This past weekend, the APA Council of Representatives voted to revise three key policies related to LGBTQ issues to take into account the most recent research and changes in law, such as the legalization of same-sex marriage. https://t.co/nrhEPJf5xe

“It was important that APA bring these resolutions into line with the latest research because these are areas that are of great interest to psychology,” said APA President Dr Sandra Shullman. “Public attitudes toward LGBTQ people have evolved swiftly in the last several years as well, resulting in legal changes that needed to be reflected in the association’s positions.”

One of the updated resolutions no longer advocates for restricting bathrooms for trans children. It also updates the definition of gender diversity, and agrees that intersex surgeries without the affected individual's assent have serious and understudied consequences.

A second updated resolution replaces a 2007 policy by using more inclusive language and takes into account changes to legislation affecting our communities that have taken place in the US since 2007. Another change came to the Resolution on Sexual Orientation, Gender Identity, Parents and their Children, which now features expanded data and research on trans, gay and bisexual parents.

In the United States, it has been found that the only Federal detention facility dedicated to housing trans migrants has left “hundreds” of requests for medical attention unanswered, and has “poor quarantine procedures and deficient treatment for mental illnesses and other chronic diseases.”

The United States’ first out gay candidate to mount a major campaign for the presidency, Pete Buttigieg, has withdrawn from the race. Although historic, his candidacy had received mixed response from the LGBTI community.

The US state of Virginia has enacted laws to protect residents against ‘conversion therapy’. A recent report by ILGA World has noted how - thanks to the tireless advocacy of activists, survivors and grassroots organisations - States and health professionals across the world are increasingly speaking up against such practices.’

After two gay men were told to stop kissing and holding hands by guards at the Galerías Monterrey in Mexico, more than 120 couples came together for a massive kiss-in.

Organised by local drag queen collective Regias del Drag, the couples gathered together and peacefully invaded the mall, kissing one another while waving Pride flags, chanting “love is love!” and “educating is the choice, no to discrimination!”.

One of the men who had initially been confronted by the guards has filed a complaint with the National Council to Prevent Discrimination (CONAPRED), and the Federal Consumer Attorney’s Office (PROFECO). His lawyers stated that the mall may be pushed to pay a fine for the incident.

Galerías Monterrey did not respond to the protest, as no guards or other staff confronted people to make them stop kissing this time. In nearby Cuba, however, a similar action ended in a different way: a kiss-in to protest censorship on TV was met with the arrest and detention of a number of activists.

In Argentina, a local advocacy group has reported that two trans inmates housed in a Buenos Aires prison are not having urgent medical needs met.

In Guyana, activists ramped up their calls for the decriminalisation of same-sex sexual activity in the lead up to the country’s elections. Guyana received 15 recommendations on LGBT-related issues at the recent 35th Universal Periodic Review at the United Nations, some of them focusing on decriminalising same-sex activity.

Archbishop Emeritus Desmond Tutu has been given a Lifetime Achievement Award for his service to the LGBTI community. Awarded by Outreach Africa, the organisers of Cape Town Pride, Tutu himself was not able to attend the ceremony nor the Pride celebrations.

Awarded a Nobel Peace Prize in 1984 for his anti-Apartheid activism and commitment to non-violence, Tutu has long been lauded for working to support marginalised communities and demographics.

"With crystal clarity, we know that he would not worship a homophobic God, and that if there is homophobia in heaven he’d rather go to hell,” said The Desmond Tutu & Leah Tutu Legacy Foundation of the Archbishop Emeritus in a statement, thanking Outreach Africa for the award.

Tutu’s daughter, Mpho Tutu van Furth, famously followed in her father’s footsteps and joined the Anglican Church. She made headlines in 2016 when the church’s stance on marriage equality forced her to give up the priesthood in order to marry her now-wife.

In Nigeria, court proceedings for the trial of 47 men accused of same-sex sexual activity have been postponed until 2 April, after several witnesses for the prosecution against the men failed to arrive in court.

39 European MEPs have called on Algeria to end the trial of Anouar Rahmani, a local LGBTI activist and human rights defender.

A report out of Equatorial Guinea has highlighted a number of human rights abuses, such as rape and torture, which women of diverse sexual orientations face, often at the hands of their own family members. 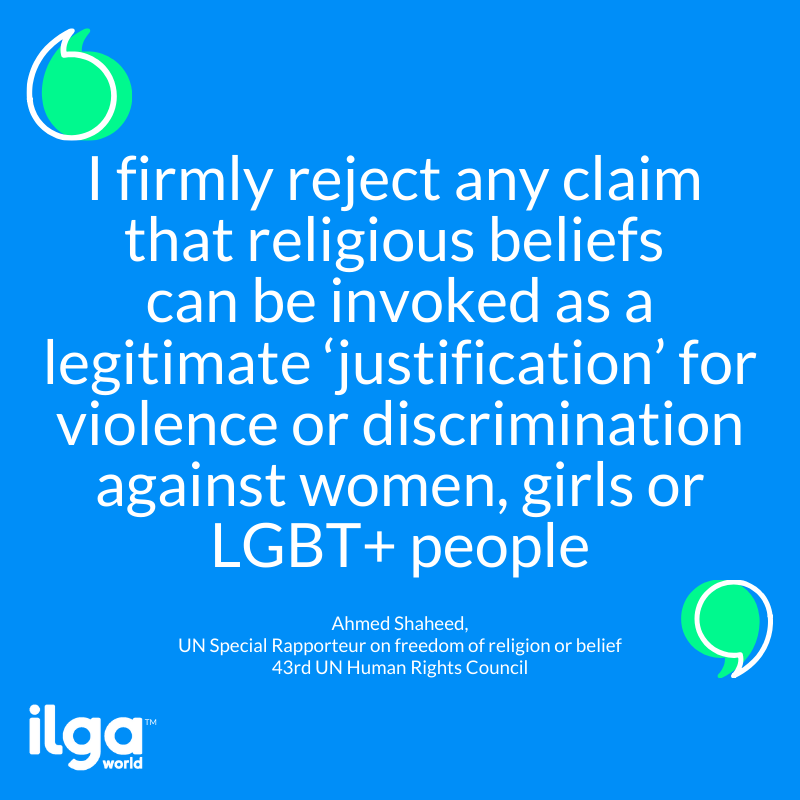 Powerful words were spoken during the UN Human Rights Council this week
by the UN Special Rapporteur on freedom of religion and belief!