Released as 2020 is coming to an end, the latest update to ILGA World’s Global Legislation Overview section of the State-Sponsored Homophobia report provides data on laws that affect people on the basis of their sexual orientation. Together with the Sexual Orientation Laws in the World map, it paints a vivid picture of the progress and setbacks that happened across the world this year.

“As of December 2020, 69 States continue to criminalise same-sex consensual activity,” noted Lucas Ramón Mendos, Research Coordinator at ILGA World and lead author of the report. “The figure dropped by one this year, as Gabon backtracked from the criminalising provision it passed in 2019 - which became the shortest-lived law of its kind in modern history. Moreover, last week Bhutan's parliament approved a bill to decriminalise consensual same-sex relations, and may soon be signed into law.”

ILGA World has been able to verify that at least 34 UN member States have actively enforced such criminalising laws over the past five years, but the number is possibly much higher. “Wherever such provisions are in the books,” Mendos explains, “people may get reported and arrested at any time even just under the suspicion of having sex with someone of the same gender. Courts actively prosecute and sentence them to jail, public flogging, or even death.”

In 2020, the whole world had to battle with the consequences of the Covid-19 pandemic. “Many were left struggling to survive in a world that has become even more unequal and violent”, Julia Ehrt, Director of Programmes at ILGA World, pointed out. “For our communities, safe spaces dramatically shrunk overnight. Some governments took advantage of these circumstances and stepped up their efforts to oppress, persecute, scapegoat, and to violently discriminate against us. In many places where laws were already a cause of inequality, things have only got worse.”

The proliferation of so-called “LGBT-free zones” in Poland, Indonesia seeking to give new boost to ‘conversion therapies’ and a reversal of two state-level bans on them in Florida, USA, and laws that could severely restrict the operation of NGOs working with our communities are only a few of the legal provisions that are being advanced across the world.

“Amidst such concerning situations, explicit legal protections against violence and discrimination have become - more than ever—paramount to safeguard our human rights and dignity, to prevent harm, and to heal from the violations we suffer,” Ehrt said.

Against all odds, positive developments have taken place even during the past 12 months: the State-Sponsored Homophobia report update is documenting how legislation that protects lesbian, gay and bisexual persons from discrimination and violence has continued to expand.

In July 2020 Sudan repealed the death penalty on consensual same-sex sexual acts. Germany has now become one of the 4 UN member States which banned ‘conversion therapies’ at the national level, and more jurisdictions in Australia, Canada, Mexico, and the United States followed suit.

Marriage equality is now a reality in 28 UN member States: Costa Rica was the latest one to join the list, becoming the first country in Central America to do so.  34 UN member States provide for some partnership recognition for same-sex couples, as Monaco and Montenegro voted to legally recognise them during the past 12 months.

As of December 2020, 81 UN member States have laws protecting from discrimination in the workplace on the basis of sexual orientation: twenty years ago, they were only 15.

As a new feature, the State-Sponsored Homophobia report is now also tracking developments in non-independent territories around the world. “Thousands of valued members of our communities live in these jurisdictions, but their activism is not always visible at the international level”, Mendos explained. “It is vital that we shine a light on their legal progress or rollbacks as well: as a global family, we are committed to our members regardless of the official status of their territory.”

Despite anti-rights forces are seemingly gaining ground around the world, this new update to the State-Sponsored Homophobia shows how our global community has collectively achieved progress in every single legal category tracked here. “This publication is a vital source of information for human rights defenders, States, researchers, media and the general public on how laws affect people on the grounds of their sexual orientation,” Ehrt concluded. “But each section of this report also contains hope for a better tomorrow – a future in which our communities will no longer have to fight to reclaim rights that should have never been taken away from us in the first place.” 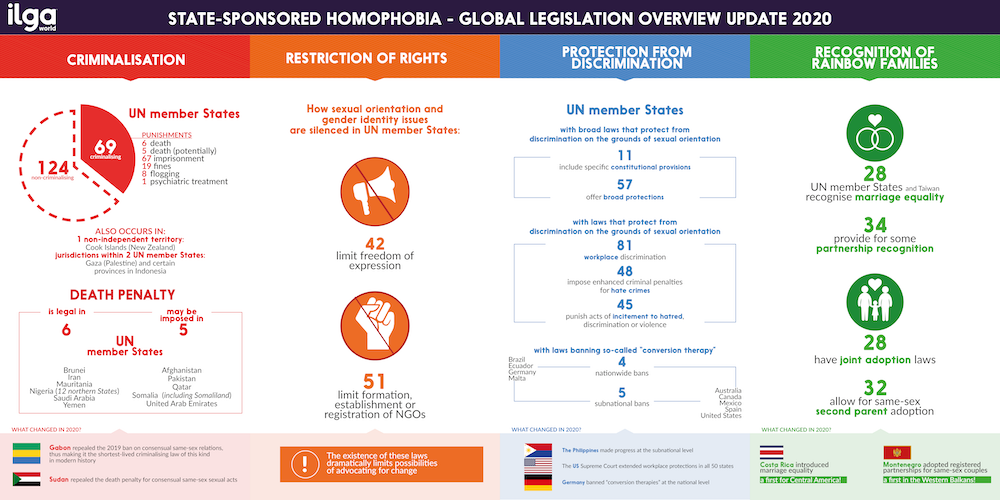 In 5 additional UN member States - Afghanistan, Pakistan, Qatar, Somalia (including Somaliland) and the United Arab Emirates - certain sources indicate that the death penalty could potentially be imposed for consensual same-sex conduct, but there is less legal certainty on the matter.

At least 51 UN member States have legal barriers to the formation, establishment or registration of NGOs working on issues related sexual and gender diversity.

57 UN member States offer broad protections against discrimination based on sexual orientation - including in education, health, the provision of goods and services and/or housing

45 UN member States have laws that punish acts of incitement to hatred, discrimination or violence based on sexual orientation