ILGA World, COC Nederland and ISHR host a side event during the 41st UN Human Rights Council looking at needs, best practices and risks of research and data collection on sexual orientation and gender identity.

The event is co-sponsored by the Permanent Missions of Canada, Chile, Colombia, The Netherlands

Social prejudice and criminalisation lead to the marginalisation and exclusion of lesbian, gay, bisexual or trans and gender non-conforming (LGBT) persons from essential services, including health, education, employment, housing and access to justice.[1]

Currently, there is a severe gap in the data available to capture the lived realities of LGBT people. Social prejudice and criminalisation can result in non- or underreporting of violence and discrimination based on sexual orientation and gender identity.

Research and data collection is crucial to create visibility and build an evidence base about human rights violations and potential responses, disprove stereotypes that feed stigma and discrimination, and aid policy-makers and other stakeholders in the formulation of State measures regarding socio-economic inclusion, access to health and education, inclusion in the civic and political sphere, anti-discriminatory measures, prevention of abuses, and access to justice.

In recent years, there has been an increase in effort and interest to conduct research on SOGI and include SOGI and LGBT people in data collection. This includes a call for disaggregated data as part of the 2030 Agenda, the development of a new LGBTI Inclusion Index, the articulation of a human rights-based approach to data by the OHCHR. Some recent best practices of community-based data collection on SOGI are the Trans Legal Mapping reports, research on the realities of violence, mental health and access to healthcare related to sexual orientation and gender identity and expression in 9 East and Southern African countries, the State Sponsored Homophobia report, and the Transrespect vs. Transphobia project.

These efforts carry benefits for - and risks to - LGBT people. Data is needed to understand the nature and extent of violence and discrimination against LGBT people, debunk stereotypes that feed stigma and discrimination, and aid in the formulation of state measures that incorporate relevant communities. At the same time, any effort to collect data about sexual orientation and gender identity raises concerns about privacy, identity, ethics, self-determination, and security. LGBT people remain vulnerable to the risks associated with the collection, maintenance and use of data.

In countries where same-sex sexual conduct is criminalised, where laws and policies are used to discriminate against or prosecute persons because of their sexual orientation and/or gender identity, or where stigma and prejudice are rampant, the probability that victims will dare to report abuses is very low, owing to fear of prosecution, stigma, reprisals or victimisation, unwillingness to be “outed”, or lack of trust.

During the 41st session of the Human Rights Council, the Independent Expert on protection against violence and discrimination based on sexual orientation and gender identity will present his report on data collection. This side event - co-organised by COC Nederland, ILGA World and ISHR - will be an opportunity to dig deeper on this report but also to focus on data collection as a means to create heightened awareness about violence and discrimination on the basis of SOGI.

The side event will also be an opportunity to share experiences from Southern and East African countries, and on evolving best practices on data collection. 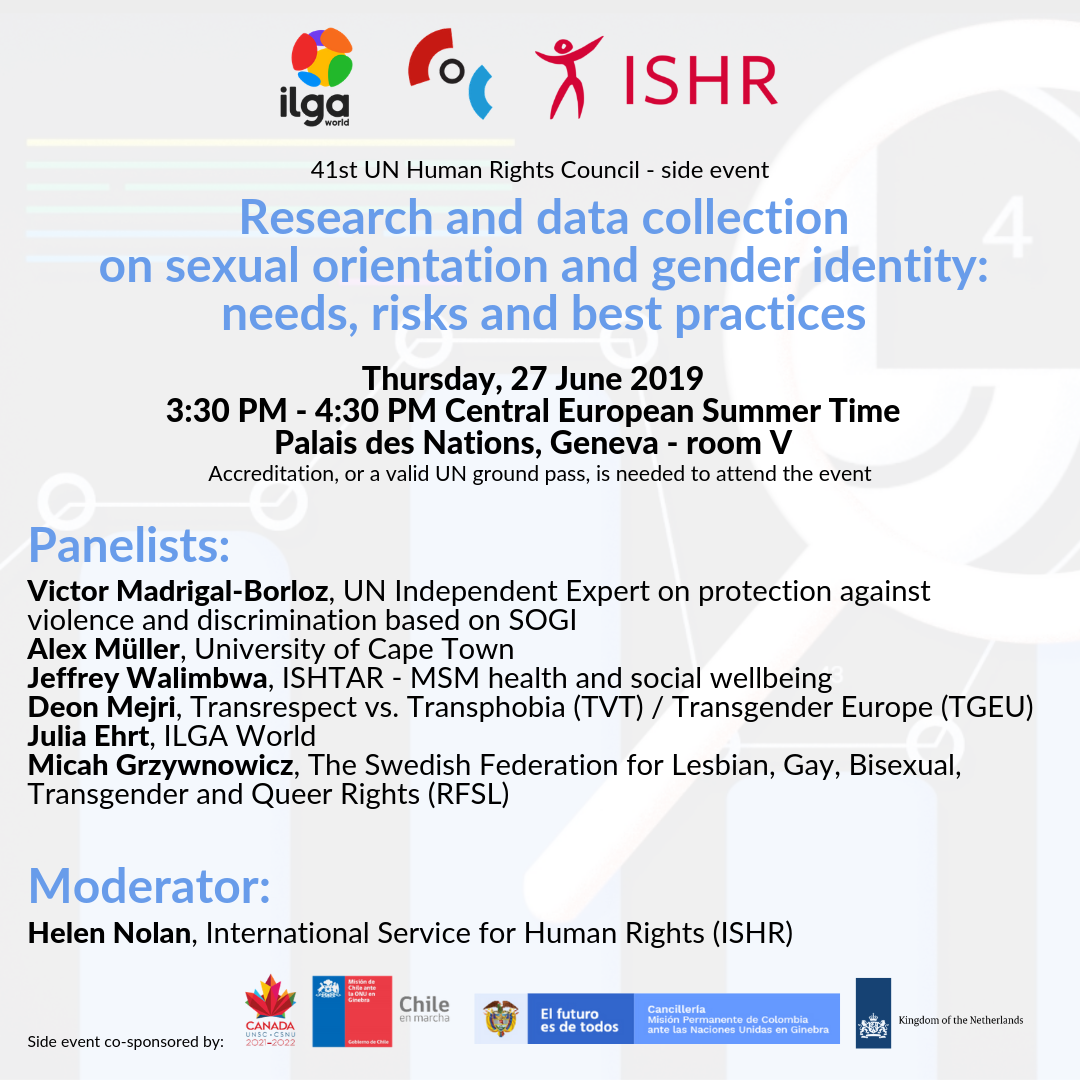