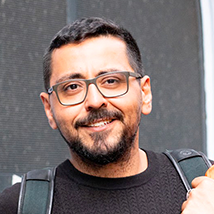 Dr. Charbel Maydaa (he/him) is the founder and Former director 2014 - 2019 of MOSAIC, the MENA Organization for Services, Advocacy, Integration and Capacity building that serves as a holistic program committed to the improvement of the health and wellness of LGBTIQ persons in the MENA region.

He has also been the Alternate Co-chair of ILGA Asia since 2017, and a Researcher / Co-Investigator at the UKRI GCRF Gender, Justice and Security hub

Since 2004, he has been promoting the rights for LGBTIQ persons through his work experience and activism in NGOs and INGOs since 2004. He led many initiatives that advanced the programs to support and raise awareness on LGBTIQ issues. He is a certified trainer on Sexual Orientation, Gender Identity and Expression, and Sex Characteristics, Reproductive Health/Rights and Clinical Management for women and men Survivors of Sexual Violence/Rape and has facilitated more than 150 trainings at national and international levels.

He has to his credit a series of publications. To name a few: