Skip to main content
#WontBeErased: ILGA condemns plans to define gender as ‘determined by genitalia at birth’
Submitted by Daniele Paletta on Fri, 10/26/2018 - 00:08

(Geneva, 25 October 2018) - The Trump administration in the United States is planning to introduce national level definition of gender “as a biological, immutable condition determined by genitalia at birth”, the New York Times has reported.

Those plans reportedly include to root the legal sex of a persons in “biology”, offering only “male” and “female” options, and restricting the possibility to change one’s legal gender after this is “clarified using genetic testing”.

Although this plan has not been confirmed yet, putting it into practice would severely jeopardize trans and intersex people’s lives, and in essence seeks to erase them. Moreover, if enacted, this move would clash with decades of legal precedents from federal courts in the U.S. where “sex” has been interpreted broadly where it comes to anti-discrimination laws - including by prohibiting discrimination on the grounds of gender identity.

ILGA strongly condemns this potential move of the U.S. administration, and urges the government to uphold the principles of self-determination and self-identification for all its people - including trans and intersex persons. 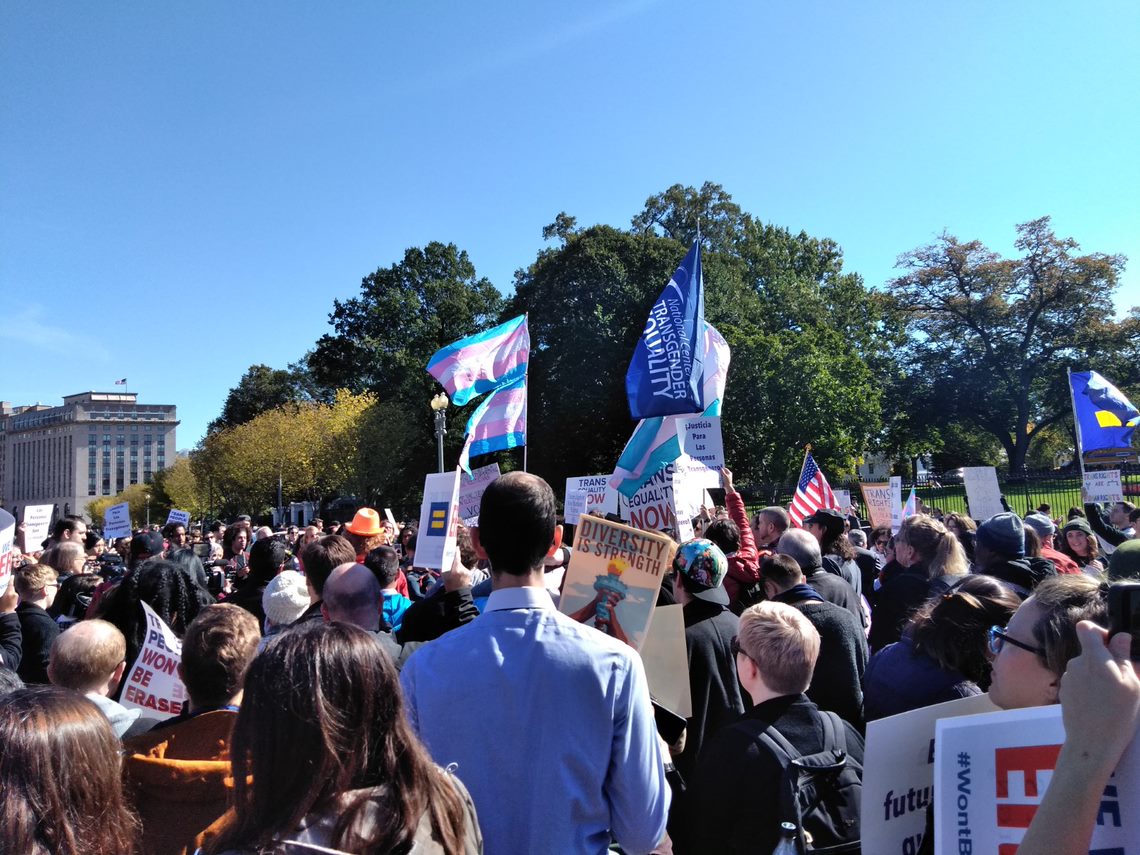 A moment of the #WontBeErased protests by the White House in Washington D.C. (ph. Zineb Oulmakki for ILGA)

While the current plans of the U.S. administration are radical and harmful to trans, non-binary and intersex people, they are simply the latest part of an ongoing backlash against LGBTI persons, women and others in many places across the globe. This attack, perpetrated by both state and non-state actors, is systematically seeking to erode the human rights achievements of the past decades by instrumentalising and foster anti-LGBTI resentment for their causes.

For example, the United Kingdom has recently witnessed a wave of anti-trans hate as the government conducted a public consultation on its Gender Recognition Act. In Chile, it took more than five years in the face of public hostility to approve its Gender Identity Law.

However, many parts of the world are heading in the opposite direction. Argentina paved the way for a self-determination model when it comes to legal gender recognition and, in the case of Malta, also for banning unnecessary cosmetic genital surgery on intersex children. Other states are following suit. The World Health Organisation has removed gender diversity as being a mental disorder. The European Court of Human Rights has ruled against requirements for trans people to undergo sterilisation in order to seek legal gender recognition, and the Inter-American Court of Human Rights has spoken in favour of trans persons’ self-determination.

There must be no turning back. Over ILGA’s 40-year history, our communities around the world have worked tirelessly to see their rights, lives and very existence respected. Decades of milestones and progress must not now be taken away.  We call upon multilateral agencies, international human rights institutions and civil society to stand up against regressive policies, and we remind governments and parliamentarians across the globe of their obligation to safeguard human dignity and the rights of all.

We won’t be erased.