The update to the Global Legislation Overview section of the report provides data on laws that affect people on the basis of their sexual orientation. Together with the Sexual Orientation Laws in the World map – which has also been updated to reflect the latest developments - they paint a vivid picture of the progress and setbacks that happened across the world in 2019.

“As of December 2019, 70 States continue to criminalise same-sex consensual activity,” notes Lucas Ramón Mendos, Senior Research Officer at ILGA World and author of the report. “The figure briefly dropped in June when Botswana decriminalised, only to pick up where it left off one month later, as Gabon regrettably decided to join the list”.

The decade indeed ends with mixed signals: while more countries are enacting robust protections for our communities, others are passing and enforcing laws that further restrict our human rights.

“Change is happening, even if at a slower pace than what we could hope for”, said Luz Elena Aranda and Tuisina Ymania Brown, Co-Secretaries General of ILGA World. “At the beginning of the decade[1] we were celebrating the momentous decriminalisation in India. Almost ten years later we had to celebrate again exactly the same victory, after a tortuous legal process of appeal.  This simply shows how the backtracking, flow and ebb of decriminalisation can be complicated, circuitous and arduous”.

Looking at 2019 alone, a lot has happened. Since ILGA World launched the 13th edition of its State-Sponsored Homophobia report in March, disturbing news came from Brunei, where death by stoning for all consensual sexual intercourse outside of wedlock - including same-sex activity - is now law. More criminalising bills were introduced or considered in Egypt, Equatorial Guinea and Indonesia, while officials in Uganda threatened to reintroduce a draconian bill that was already withdrawn in 2014.

There are currently 6 UN Member States that actually impose the death penalty on consensual same-sex sexual acts, and a further 6 where such a punishment is technically possible. Unconfirmed reports indicate that five men may have been executed in April this year in Saudi Arabia; in Iran, a man might face execution if charges against him are confirmed.

"There is a very noticeable re-invigoration of the campaigns to push back against our hard fought and won victories for equality in human rights with states and their legal jurisdictions. And we need to double down to ensure we continue to highlight and bring to task those regimes that continue this oppression based on one's sexual orientation", said Aranda and Brown.

ILGA World has collected information showing that laws criminalising consensual same-sex conduct have been actively enforced in at least 35 UN Member States over the past two years.

“These are far from being dormant regulations,” comments Julia Ehrt, Director of Programmes at ILGA World. “Beyond that, many States have also enacted provisions that restrict the rights to freedom of expression, peaceful assembly and association. These provisions have a severe impact on the ‘here and now’ of our communities: they severely curtail any prospect of change for the future, as they attack key rights that are instrumental to community organising and advocacy activity”. 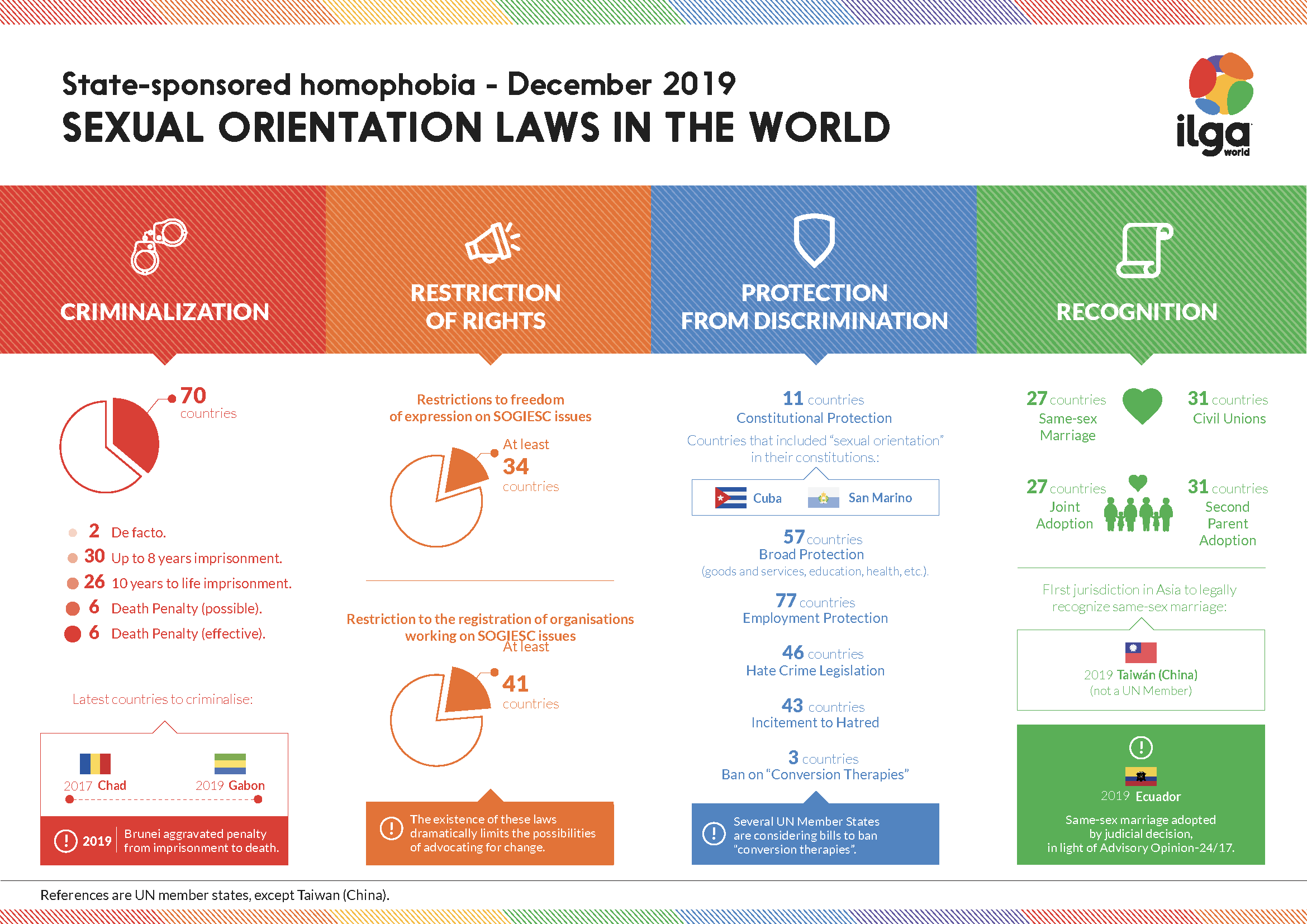 On the other hand, legislation that protects lesbian, gay and bisexual persons from discrimination and violence have continued to expand.

Angola, Cuba, Kosovo, North Macedonia, Portugal and San Marino are among those places that have enacted legal provisions to protect people from discrimination based on sexual orientation in 2019.

The fight to ban ‘conversion’ therapies is ongoing across the world: while only 3 UN Member States have nationwide bans, similar bills are being considered in many more countries, and progress at a sub-national level has continued at a steady pace, especially in the United States.

In 2019, marriage equality also became a reality in Austria, Ecuador and several states of Mexico, as well as in Taiwan (a first in Asia). Approved in October, it will also become legal in Northern Ireland in January 2020.

“It is important to remember that, beyond all these advances and setbacks, there are people who are constantly impacted by these laws: provisions that criminalise, protect or recognise us have an impact on our communities every day,'' conclude Aranda and Brown. “Repealing criminalising laws and passing positive ones make a significant difference, and the upcoming decade will be an important period for governments to show they are truly committed to ‘leaving no one behind’. We hope that by 2030 the numbers of laws on the books, and the realities for LGBTI persons on the ground, will demonstrate that there are truly equal rights for all”.

There are 123 UN member States (65% of UN Member States) where consensual same-sex sexual acts between adults are legal.

6 UN member States impose the death penalty for consensual same-sex sexual acts between adults. In 4 of them (Iran, Saudi Arabia, Yemen, Sudan) it is applied State-wide; in 2 (Somalia, Nigeria) it is implemented only in specific provinces.

At least 34 UN Member States (18%) have legal provisions that restrict the right to freedom of expression on SOGIESC issues.

At least 41 UN Member States (22%) have legal provisions that prohibit the registration or operation of organisations that work on sexual orientation issues.

11 UN Member States (6%) have Constitutions that explicitly include sexual orientation in their non-discrimination clauses.

46 UN Member States (24%) impose enhanced criminal penalties for offences motivated by hate towards the victim’s sexual orientation, and 43 (22%) States prohibit acts of incitement to hatred, discrimination or violence based on sexual orientation.

[1] ILGA World has been producing the State-Sponsored Homophobia report since 2006. Versions from previous years can be found here: https://ilga.org/state-sponsored-homophobia-report