After a few months of hiatus, ILGA World’s bulletin is back: week after week, our members and readers will be given access to a collection of news affecting people of diverse sexual orientations, gender identities and expressions, and sex characteristics in every part of the world – told with journalistic accuracy and yet firmly rooted in the voices of our communities.

During the past two weeks, our rainbow family carried on fighting for a more equal world. 53 States from all regions in the world have called on the United Nations Human Rights Council to urgently protect intersex persons in their autonomy and right to health. We rejoiced with our communities in Turkey for the acquittal of the 19 people accused of “unlawful assembly” for taking part in a Pride march. We celebrated the memory of a South Korean trans soldier who was found dead earlier this year: she had fought against her dismissal, and has now been given a posthumous victory, as a Court recognised that her discharge was “undoubtedly illegal and should be cancelled”. In the State of Hidalgo, Mexico, two municipalities registered the birth of two babies, recognising them as children of lesbian mothers.

More challenges are ahead: our communities in Botswana will have to wait some more for a ruling on the State's attempt to overturn the decriminalisation of same-sex intimacy between consenting adults. Meanwhile, in the United States, the state of Texas has removed resources for LGBT youths from the website of the Department of Family and Protective Services. In Australia, people are coming together for our trans and gender diverse siblings, calling for gender affirming surgeries to be covered by Medicare.

Read this two weeks' news from...

The decision to dismiss an out trans soldier last year was “undoubtedly illegal and should be cancelled”, a court in the Daejeon District of South Korea ruled.

The tank operator was discharged from the military after coming out as a trans woman and undergoing gender affirmation surgery in Thailand. She launched a legal challenge against her dismissal—one she couldn’t see it through, as she passed away in March. Her family carried on her lawsuit after her death.

LGBT group Rainbow Action welcomed the ruling, while calling on the government “to ensure that transgender and LGBT people can serve as soldiers on an equal basis”.

A policy of military conscription for male citizens exists in South Korea, with women being allowed to join the armed forces voluntarily. Trans persons are barred from entering, though no explicit law exists to account for those who medically transition while in the armed forces.

According to a recent study conducted by Intersex Asia, 59% of Asian intersex people didn’t get any support from their governments in the battle against Covid-19, which severely impacted their financial situation.

In response to a recent Madras High Court order, India’s National Medical Commission issued an advisory to medical institutions, asking them to refrain from adopting textbooks that  have “unscientific, derogatory and discriminatory information” about the LGBTI community.

A Japanese trans man is challenging the country’s laws which prescribe sterilisation for a person to legally change their gender.

In a reported first for the country, Nepal introduced a third gender category in the national census.

In response to a Tweet from a primary opponent, #Texas Gov. Greg Abbott removed a page from the state's child welfare website that included a suicide hotline for LGBTQ youth.

The livelihoods of #LGBTQ youth should not be reduced to political pawns. https://t.co/Qjy7Ko8Hv1

Texas removed two web pages from its website which provided resources for LGBT youths, including a link to a suicide prevention hotline.

The page now reads “The Texas Youth Connection website has been temporarily disabled for a comprehensive review of its content. This is being done to ensure that its information, resources, and referrals are current”. Republican candidate Don Huffines, the primary opponent of the current governor Greg Abbott, had heavily criticised the pages before their removal.

“The state is responsible for these kids’ lives, yet it actively took away a resource for them when they are in crisis,” said Ricardo Martinez, CEO of the advocacy group Equality Texas. “What’s worse, this was done at the start of Suicide Prevention and Awareness Month. LGBTQ youth who have been in foster care report three times greater likelihood of attempting suicide in the past year (according to a Trevor Project research brief). Again and again this year, we are simply asking that these kids’ lives not be politicized.”

A special Committee in Texas, United States, has voted to advance “HB 25”, a discriminatory bill banning trans youth from taking part in sports with their peers. The bill, then, was passed by the House and it is now heading to the Senate.

Deliberate misgendering in the workplace is a human rights violation, said the British Columbia Human Rights Tribunal in Canada ruling on a case issued by a non-binary person against their former employer.

The Court of Appeal in Botswana has postponed the ruling on a case in which the State is aiming to overturn the 2019 decision that decriminalised same-sex intimacy between consenting adults. The president of the Court hasn’t set a date for a ruling, arguing that the matter needed considerable research and debate.

Before this week’s hearing, LEGABIBO (Lesbians, Gays and Bisexuals of Botswana) Ceo Thato Moruti said that the LGBT community looks forward to putting “the matter to rest”.

The 2019 judgment of the High Court decriminalising consensual same-sex sexual conduct had already led to positive change in Botswana. A recent Afrobarometer survey recorded a 10-percentage-point gain in tolerant attitudes towards LGBTIQ persons. The country’s five-year plan for removing barriers to accessing HIV and health services also noted that “the recent overturning of laws criminalising same-sex sex removes a significant human rights barrier for gay men, men who have sex with men and other LGBT persons.”

Marking a legal victory for rainbow families, the High Court of Namibia recognised the son of a same-sex couple his right to Namibian citizenship by descent.

Mexico: two municipalities register children of lesbian mothers in the State of Hidalgo

In a reported first under new regulations in the State of Hidalgo, the municipalities of Pachuca and Tepeji del Río have registered the birth of two babies, recognising them as children of lesbian mothers.

As Milenio points out, both couples had to wait for months before their children could be registered, although a similar case had already been brought before a court in 2019.

The registration was not possible under the provisions included in the reform of the State’s Family Law that happened in 2020. Thanks to this, a representative of the State’s Office of the General Directorate of the Family Registry, “we can now count on these tools for the protection of legal affiliation, contemplating the legal recognition of the existence of same-sex couples and, at the same time, the best interest of children”.

In Goiânia, Goiás, Brazil, the police has opened an investigation on four councilors, who reportedly made homophobic remarks during a public session of the City Council.

In Chile, the trial has begun for the case of Nicole Saavedra Bahamondes, a young lesbian woman who was murdered more than five years ago.

The first medical unit run by and for trans people has opened in Mexico City. The Unidad de Salud Integral para Personas Trans has a protocol for the most vulnerable person in the community – including homeless, migrant, and undocumented persons.

Over 130.000 Australians call for gender affirming surgery to be covered by Medicare

Over 130.000 people in Australia have signed a petition calling for gender affirming surgery to be covered by Medicare. The Federal petition received more than 34,000 signatures within 24 hours.

According to media reports, undergoing a gender affirming surgery in Australia can cost an average of AUD 30,000 (USD 22,070). Trans Health Australia founder Melody Moore lamented surgeons may overcharge trans and gender diverse people due to the shortage of specialised surgeons.

“To have such a huge engagement in just 24 hours shows just how much this change is needed,” Speak CEO Sage Akouri told Star Observer. “Allowing gender affirming surgery to be covered by Medicare can help thousands of people experience the absolute joy of having our appearance match who we truly are.”

A popular Pride Walk in Adelaide, South Australia, has been vandalised with the word “repent” written in black paint.

Fantastic news from Ankara: the 19 METU Pride human rights defenders have been acquitted after a trial that lasted 2 years. This is an important judgement which upholds LGBTI people’s right to freedom of assembly & expression! https://t.co/lOjyNsxlLK

Pride is not a crime: 19 marchers acquitted in Turkey

The 19 people accused of “unlawful assembly” for taking part in a Pride march in May 2019 have been acquitted, a Turkish court decided earlier this month.

The 18 students and one academic were detained, charged, and prosecuted for attending the Pride march at Turkey’s Middle East Technical University (METU) in Ankara on 10 May 2019. The day before the scheduled event, which had peacefully taken place every year since 2011, the University administration announced it could not go ahead. Activists and students got together regardless, as the University had no legal basis to ban the march. However, the administration called the police, who used excessive force to disperse the crowd.

“We would like to point out that from the very beginning, there should have been no trial at all, and now, with this precedent, we will continue to raise the LGBTI+ struggle,” said ÜniKuir’s Özgür Gür, one of the activists acquitted. “We thank everyone for their support.”

In Portugal, parliament approved four bills prohibiting discrimination of blood donors on the basis of their sexual orientation.

In Spain, the case of a woman diagnosed with “homosexuality” by her gynecologist sparked criticism and rose concerns among LGBT people and activists. 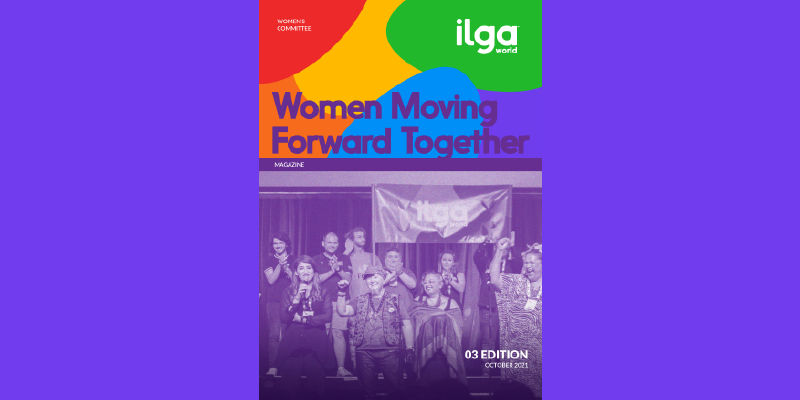 Women moving forward together: the third issue is here! The magazine, created with a feminist approach by ILGA World’s Women's Committee, tells the story of how LBTIQ women have been, are and continue to be a driving force in the history of our movement. Enjoy your reading!