During the past two weeks, we witnessed promising advances in relation to LGBTI human rights.

Japan has reportedly started to consider an updated format for resumes to combat gender-based workplace discrimination, while a new analysis of community surveys in Australia has shown a rapid, historic shift in HIV prevention among gay and bisexual men.

In many parts of the world, however, discrimination and marginalisation continue making our communities particularly vulnerable.

A new report has highlighted how, over the past two months, security forces in Cameroon have arbitrarily arrested and used violence against at least 24 people for alleged consensual same-sex conduct or gender nonconformity. The La Soufrière volcano eruption in Saint Vincent and the Grenadines caused the evacuation of thousands, leaving human rights defenders concerned about the possible deterioration of the living conditions of many in our community.

The recent eruption of La Soufrière volcano in Saint Vincent caused the evacuation of thousands from surrounding villages in the northern part of the country. According to human rights organisations, the emergency could further deteriorate the living conditions of LGBTQ evacuees, who are already battling against marginalisation and discrimination in a region where they are criminalised.

“LGBTQ+ evacuees and PLHIV may fall through the cracks or feel forced to hide their status, sexuality and/or gender identity to access help or avoid discrimination,” says Kenita Placide, executive director of The Eastern Caribbean Alliance for Diversity and Equality Inc (ECADE). “We will do everything in our power to provide safe and affirming assistance for LGBTQ+ people and PLHIV, in addition to women and children who face their own set of risks in disasters.”

Considering the needs of the community in the longer term, ECADE has launched a fundraising appeal to provide relocation and housing support, care services, mobile credit for emergency communication and safe spaces for those most-at-risk.

In Canada, the first gay couple to get married in church nearly five decades ago reported that they are still fighting to have their marriage registered by the Manitoba government.

In the United States, the National Collegiate Athletic Association (NCAA) issued a statement reaffirming its support for trans student-athletes competing on teams that align with their gender identity, and suggested it may not hold championship games in states with anti-trans laws on the books.

In the United States, New York City is set to launch a workforce development program for LGBTQI communities, which will specifically focus on supporting homeless and runaway LGBTQI youth.

According to reports, 13 people were arrested in Bafoussam in February 2021 as police officers raided the office of Colibri, an organization that provides HIV prevention and treatment services. During the same month, 12 persons were arrested on homosexuality charges while at a restaurant in Bertoua, and two trans women were arrested in Douala.

“These recent arrests and abuses raise serious concerns about a new upsurge in anti-LGBT persecution in Cameroon”, said Neela Ghoshal, associate LGBT rights director at Human Rights Watch. “The law criminalizing same-sex conduct puts LGBT people at a heightened risk of being mistreated, tortured, and assaulted without any consequences for the abusers.

According to ILGA World’s State-Sponsored Homophobia report, the country’s penal code states that anyone who “has sexual relations with a person of the same sex” may face a penalty of 6 months to 5 years in prison and/or a fine.

In Kenya, an LGBTI human rights defender and refugee lost his life after a burn attack in the Kakuma refugee camp. The UNHCR has urged local authorities “to accelerate their investigation into the alleged attack”, while human rights organisations are calling for LGBTQ+ refugees at Kakuma to be relocated to a safe location outside the camp.

The High Court of Namibia ruled against a gay couple whose new-born twin daughters, conceived via surrogacy in South Africa, are being denied travel documents that would allow them to be brought home.

More than 20 human rights organisations from across South Africa are urging the president, government and religious leaders to speak up and to help stop a growing wave of hate crimes against our communities. Over the past two and a half months, at least six LGBTIQ individuals were reported murdered in the country.

A recent report finds that LGBT activists in Senegal have been subjected to smear campaigns and death threats over the course of 2020.

The Ministry of Health, Labor and Welfare of Japan has announced it is considering a new standard for resumes, in a move to try and curb workplace discrimination.

As Nikkei.com reports, the new format would make it optional to fill in the column to indicate a person’s gender marker, moving beyond the historic male/female pre-set options. Job applicants could also choose to leave the column blank.

To date, The Japan Times points out, many firms in the country require that job applicants indicate their gender and even provide a photo on resumes. However, in November 2020, an online petition collected more than 10,000 signatures to urge companies to change these practices, which they claim could lead to gender-based discrimination.

The petition was submitted to government officials and to the Japanese Standards Association, whose resume format had been referred to by stationery makers until being deleted from the association’s official website in July 2020.

In Bahrein, a young person received a six-month imprisonment sentence on charges of 'incitement to debauchery' and 'prostitution'.

ILGA Asia has launched a call for videos from LGBTI civil society in the region to highlight the stories and activism of their communities.

A prominent director and playwright in Iran has been criticized for using homophobic slurs as he decried the state of a neighbourhood in Tehran.

In Malaysia, homophobic articles pathologising LGBT people and promoting marginalisation, which have been on the Ministry of Health’s page for almost a decade, have been unearthed after the portal came under fire for a victim-blaming article on sexual harassment.

The Constitutional Court has struck down a provision in the civil marriage law that included  "homosexual conduct" among the grounds for divorce.

The decision was taken about a case in which a man had filed for divorce after finding out about his wife’s sexual orientation. In a third-party intervention, human rights organisations Movilh pointed out that "since infidelity is also a ground for divorce, it is unnecessary, as well as stigmatising, to speak of 'homosexual conduct', since in no case does (the law) refer to heterosexuality".

Movilh celebrated the ‘historic’ decision as a move “towards the definitive repeal of a homophobic law” which would eventually result in “better conditions of equality” for our communities.

An LGBTI human rights defender in French Guyana reported receiving several attacks and homophobic death threats over the course of the past few weeks.

In Argentina, the LGBTI community demands further investigation on a trans man’s recent disappearance, highlighting how his situation reflects the various layers of discrimination and invisibility lived by the community.

In Colombia, the Constitutional Court highlighted in a ruling that the repeated discrimination against LGBTI persons is pushing them towards invisibility.

Thanks to @aidsmap for coverage of our recent publication in @AIDS_Journal on the historic shift to biomedical #HIV #prevention among Australian gay and bisexual men @CSRH_UNSW @_afao @napwha @KirbyInstitute https://t.co/xUQjsd4wXz

There has been a rapid, historic shift in HIV prevention among gay and bisexual men in Australia, according to a new analysis of community surveys over five years.

A recent report shows that while consistent condom use has fallen dramatically, there has been an uptake of PrEP and HIV treatment.

Data for the research come from 32,048 responses to the Australian Gay Community Periodic Surveys, conducted between 2014 and 2019.

Professor Holt and colleagues, who conducted the research, were quoted as saying that their analysis of national behavioural surveillance data demonstrates “a historic change in the sexual practices of Australian gay and bisexual men”. These changes, they added, are likely to have contributed to recent declines in HIV infections in Australia.

However, Holt also addressed the limitations of engagement of the completed research. The next phase of the project will be designed to fix some problems with engagement to expand the diversity of participants.

In New Zealand, parents and caregivers of LGBT youth will have their own support group established in South Canterbury, creating an opportunity to “be there for each other”.

A new briefing paper on domestic and family violence published by Intersex Human Rights Australia pointed out how “people with innate variation in sex characteristics may experience violence in the home due to perceptions and understandings of their variations, leading to vulnerability not just in the home but also at school and in other social environments”.

A new, ongoing research across Aotearoa New Zealand is highlighting how LGBTIQ young people are still facing higher rates of stigma and discrimination than their peers.

The Constitutional Court declared that the rule which requires a same-sex family partner to pay a higher state fee for the inheritance of the estate of their deceased partner than spouses pay, shall be abolished.https://t.co/p4dveZcjvz

Latvia: Constitutional Court decides in favor of same-sex partners in an inheritance case

The Constitutional Court of Latvia announced it will abolish a rule which requires a person in a same-sex partnership claiming the inheritance of their late partner to pay a higher state fee than what heterosexual spouses would pay.

According to a local news portal, Government regulations provide that the State fee for the maintaining of real estate rights in the Land Registry is significantly lower for spouses than for other heirs.

The Ombudsman, however, disputed the compliance of this rule with the Constitution, considering that it does not protect the families formed by same-sex partners: to claim their late partner’s inheritance under the current regulation, a person in a same-sex couple could pay a state fee that is 60 times higher than what would be paid by heterosexual spouses.

The latest ruling has now clarified that the Constitution includes the State's obligation to protect and support every family. Thus, the contested rule will expire in June 2022, and future regulations are set to include same-sex partners in the reduced fee.

The European Court of Human Rights has accepted to examine the requests of 261 sex workers in France against the criminalisation of clients, reportedly marking the first time that the Court will be asked to take a decision on the issue.

In Switzerland, marriage equality will be voted on in a referendum, after those opposing the law passed by parliament in December 2020 managed to collect enough signatures to require a popular consultation on the matter.

A same-sex couple was refused a birth certificate in Bulgaria for their newborn daughter. Now, an opinion issued by the Court of Justice of the European Union indicated that the country’s lack of recognition for same-sex parented families cannot justify a violation of EU freedom of movement law.

Members of Northern Ireland’s Legislative Assembly have passed a non-binding motion calling on the Communities Minister to  introduce a ban on ‘conversion therapy’.

On the occasion of Lesbian Visibility Day, the Eurocentralasian Lesbian* Community has launched a campaign to spotlight the experiences of out lesbian politicians from Europe, Africa and Oceania. 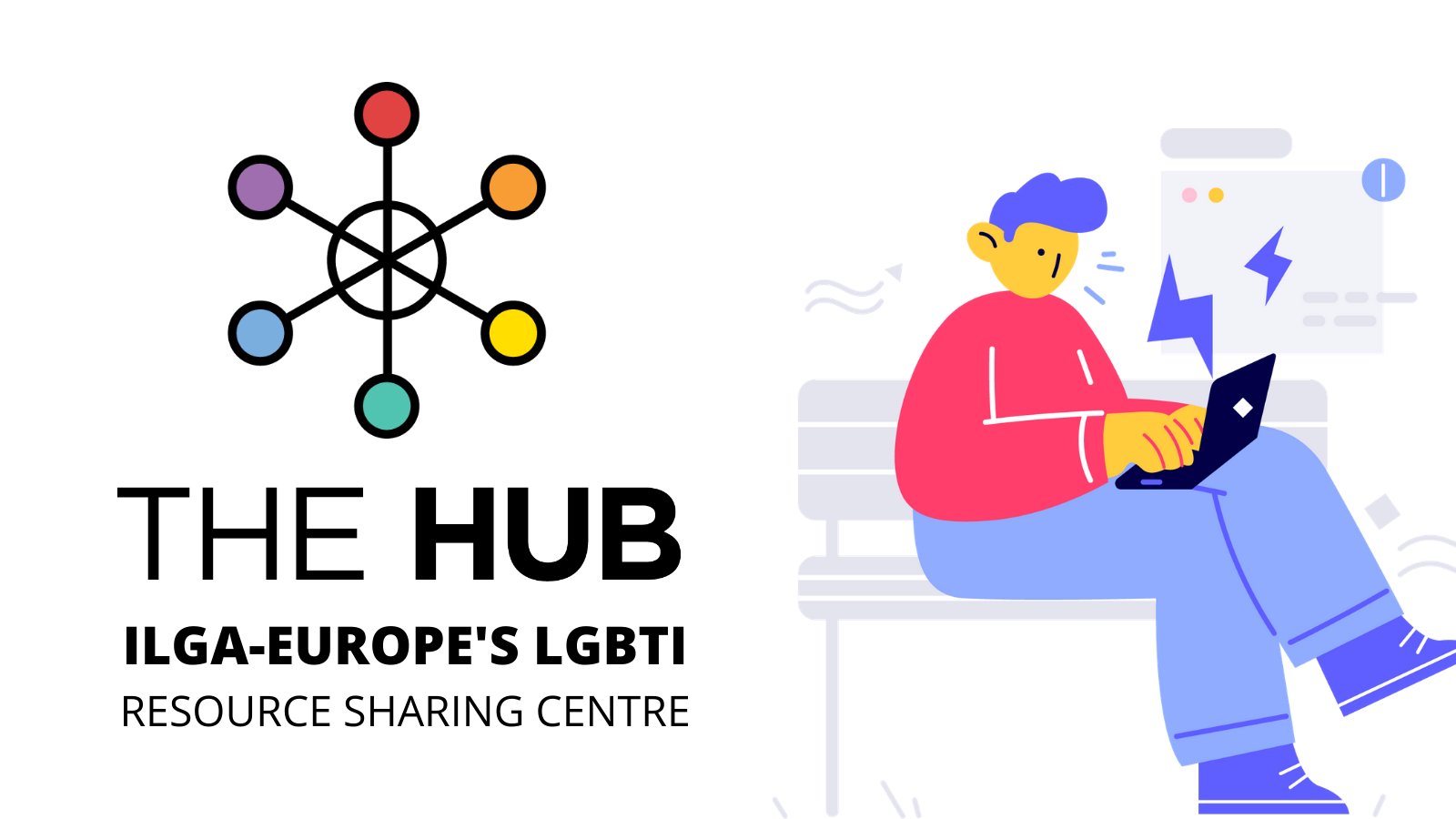 Our friends at ILGA-Europe have launched The Hub,
an online free resource sharing centre full of easy-to-access guides for every aspect of LGBTI activism.
Defenders are invited to contribute by sharing their knowledge,
and to enjoy a growing number of resources with insights, case-studies and more.

Would you like to see your organisation featured in this space of the newsletter?
Send us your photos at media@ilga.org!

If you have got news from your country on region, or have spotted studies and researches about our communities, let us know at media@ilga.org!
Every week, we will review your tips and consider them for publication.