With the announcement by the WHO that COVID-19’s spread would now formally be considered a pandemic, and the resulting emergency measures in countries all around the world, it can be hard to focus on the positive strides made by our communities.

All around the world, courts have stood by our people in the face of unfair discrimination, with a United States judge ruling that South Carolina schools may talk to their pupils about same-sex relations, and the Supreme Court in Chile ruling that healthcare companies cannot limit medical access to trans clients.

Even where legal systems have failed us, we see bravery and resilience from our communities and allies. Human rights defenders are rallying behind an activist in Russia who was accused of allegedly “distributing pornography”; a woman in Madagascar, accused of being in a relationship with a 19-year-old woman,  has received widespread support on social media as she awaits trial; a Hong Kong pastor has vowed to continue officiating same-sex weddings despite the risk of arrest; and activists in Australia have decried the postponement of a deadline of a key inquiry into discrimination in schools.

To many the world feels uncertain and dangerous right now. We know all too well how LGBTI persons can face unique challenges during a health crisis – especially the most marginalised amongst us - when stigma, discriminatory legislation and prejudice can rear their ugly heads even higher. Now more than ever, this is a time for solidarity: let’s commit to continue to look out for each other.

The Supreme Court of Chile has ruled against a local healthcare provider which sought to deny a trans man up to 75% of the funding offered to other clients. According to El Ciudadano, the company claimed that being trans is a “pre-existing disease” and that they were thus allowed to limit coverage.

The company appealed an August 2019 ruling on the matter, but the Supreme Court sided with the plaintiff and local activists in a unanimous ruling.

The Supreme Court noted that the healthcare provider’s actions were “unfounded”, as a trans person “does not suffer any type of alteration in the mechanisms that work to keep the human body alive and functioning.” The company was ordered to fully incorporate the plaintiff into their system with full medical cover.

Local activist group Movilh, which assisted the plaintiff, celebrated the victory: "We are in the presence of a huge judicial triumph to guarantee equal access to private health for trans people," said lawyer Mónica Arias in a statement.

The Digital Defenders fund has put out a call for Latin American and Caribbean LGBTI groups to submit proposals for activities or projects aimed at expanding digital and holistic security for rainbow communities in the region.

In Jamaica, Montego Bay Pride organisers have ended a lawsuit against local authorities who had blocked them from gathering at the Montego Bay Cultural Centre.

The Mexico City government marked a decade of marriage equality in the city by hosting 140 same-sex weddings in a mass-celebration.

"In the instance where the strong and broad community opposition to the bill prevails and it doesn't pass, the Prime Minister's promise to protect kids in schools looks destined to remain unfulfilled," @AnnaEquality https://t.co/rdC8n9fQ3D

The Australian government has extended the deadline of a proposed inquiry aimed at promoting laws to protect LGBT students and teachers from discrimination.

The Australian Law Reform Commission (ALRC) requested to wait until 12 months after the final vote on the contentious “Religious Freedom Bill” instead. This bill would contain provisions to protect a person making discriminatory comments under the shield of it being a genuine "statement of belief", and has made headlines for months across the country.

Meanwhile, the request to extend the deadline of the inquiry into discrimination in schools was not formally announced by the government: according to reports, it only appeared on the relevant webpage on the ALRC website before being officially confirmed, the Sydney Morning Herald reports.

Local human rights defenders have decried the request, saying that to wait for a potentially discriminatory bill to pass before discussing anti-discrimination legislation is “irresponsible”.

"This spells danger and discrimination for students at religious schools, whichever way you look at it "said Anna Brown, chief executive of advocacy group Equality Australia.

A national anti-discrimination consultation was held in Tonga, bringing together civil society, government and other stakeholders to discuss the need to change laws which negatively affect women, youth and LGBTI persons.

A survey using anonymous patient data from between 2012 and 2017 has revealed that preventive care and other measures have resulted in a three-quarter reduction in the HIV-rate among gay, bisexual, and other men who have sex with men (MSM) in Australia.

Russian courts released LGBT feminist activist Yulia Tsvetkova from house arrest, which was imposed on her in November 2019 after she was accused of “distributing pornography”. Tsvetkova, who had often given sex education classes and hosted lectures for the LGBT community, was arrested after posting body-positive drawings to her social media. Her lawyers managed to secure her release on the grounds that she had not yet been charged after four months, though a trial against her is still set to go ahead.

Tsvetkova faces up to six years behind bars over the pornography charges. She was previously fined for violating the country’s law banning “propaganda of non-traditional sexual relations”.

In a joint statement, the organisation Civil Rights Defenders and ten other groups said the “charges against her are widely believed to be fraudulent and an attempt to silence her voice and artistic expression, which she has used to speak out on equality, gender identity and a positive body image.” The statement went on to demand her unconditional release.

Amnesty International joined in, saying the case was “absurd”, and created a petition calling for the case to be dropped.

The European Commission against Racism and Intolerance released reports on Germany, Belgium and Switzerland, looking into the state of LGBTI equality in the countries.

In the United Kingdom, National Museum Cardiff is working to promote the little-known LGBT history behind some of the venue’s artworks by hosting “Queer Tours”. The first was announced for 15 March, though government-mandated closures in response to the COVID-19 pandemic mean that the  future of the initiative is uncertain.

A lesbian woman who was arrested in Madagascar has received widespread support on social media, with local human rights defenders and hundreds of Malagasy citizens calling for her release.

According to reports, the woman was accused of being in a relationship with a 19-year-old woman and arrested for “misappropriation of a minor”.  As ILGA World’s State-Sponsored Homophobia report points out, consensual same-sex relations are not criminalised in Madagascar, however, since 1999, the criminal code sets the age of consent at 14 for different-sex sexual acts and 21 for same-sex acts.
The woman, 33,  faces five years in prison if found guilty in the trial, currently scheduled for 10 April.

“She is in prison because she is homosexual”, LGBT Manager of Human Rights Madagascar Johnatan Randrianary said. The law “is really discriminatory”, and human rights defenders are calling on it to be amended.

The 2020 Pan Africa ILGA Regional Conference in Ghana has been postponed tentatively until the last quarter of 2020, in order to support efforts to slow the spread of COVID-19 pandemic.

According to reports, a non-binary asylum seeker from Uganda was assaulted in Kenya’s Kakuma refugee camp on the grounds of their gender identity and expression.

A South Carolina federal judge has ruled against a 1988 state law that prohibited any discussion of same-sex relationships in health education in public schools.

According to Lambda Legal, the law only allowed talk of same-sex relationships in the context of educating pupils about sexually transmitted diseases, and threatened teachers who spoke about the subject more broadly with dismissal. The court ruled that this violated the US constitutional requirement for equal protections as it unfairly singled out LGBTQ students, and barred state officials from continuing to enforce the law any longer.

A 2017 survey from GLSEN, a group working to end anti-LGBTQ discrimination in educational spaces, found that almost 90% of students in South Carolina schools regularly heard homophobic remarks, while up to 76% faced verbal abuse.

“I am very excited that this discriminatory law can no longer be enforced in South Carolina,” the student president of Charleston County’s Gender and Sexuality Alliance (GSA) said. “I hope we can continue to work toward a more accepting and equal state-wide community. I know how frustrating it can feel to be told by a teacher that they can’t talk about who you are.”

A survey of nearly 30,000 individuals by United States Centres for Disease Control and Prevention has found that LGBQ teenagers are at disproportionate risk of physical and sexual violence as compared to their straight peers.

In the United States, Idaho has passed a bill banning trans women and girls from competing in their gender, and mandates that athletes undergo invasive testing to “prove” their gender.

A trans man and pastor, Marrz Balaoro, has stated that he will continue to officiate same-sex weddings in Hong Kong despite local courts dismissing his application to practice without fear of arrest.

Balaoro was arrested in 2017 for hosting same-sex marriage ceremonies at the LGBT-friendly church he had founded. Charges were eventually dropped.

He then  filed for a judicial review case with the Hong Kong High Court in 2019, hoping to win the right to marry same-sex couples. The court, however, rejected his application - noting that it did not have the power to protect him from future arrests.

“The court said that I did nothing wrong or illegal – that is my assurance that I won’t get arrested,” he argued. “I can still do [same-sex marriages] and I will continue to do so.”

Hong Kong does not recognise marriage equality, but earlier in 2020 a court ruled that same-sex couples married overseas may apply for public housing.

Being LGBTI in Asia is inviting CSOs, networks and community-based organisations working on LGBTI inclusion in the Asia-Pacific region to submit small grant proposals before 31 March. 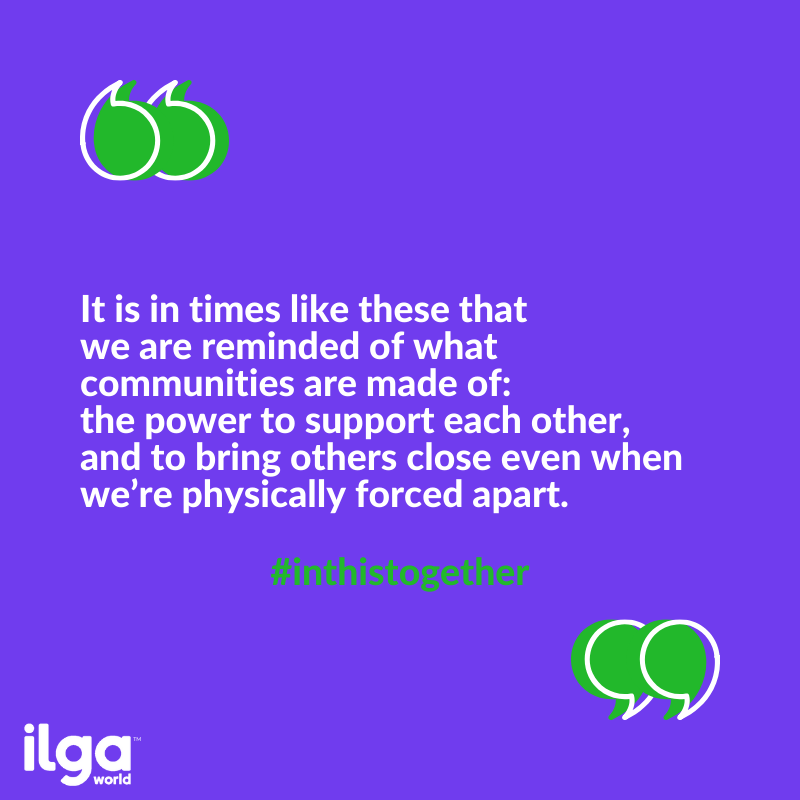 We at ILGA World are thinking of you in these difficult and uncertain times,
and wishing health and safety to you and your extended families and loved ones.
Check out also our collaborative (and developing) list of resources for remote working and wellbeing!