Today is celebrated as International Non-Binary People's Day. A critical day for us to recognize and support those around us who identify as non-binary and celebrate the rich diversity of our community.

Our Manager of the Gender Identity, Gender Expression and Sex Characteristics (GIESC) Programme here at ILGA World, Dennis van Wanrooji, penned a special message sharing their journey in identifying as non-binary and gives a look into the upcoming activities and strategic direction of the department. 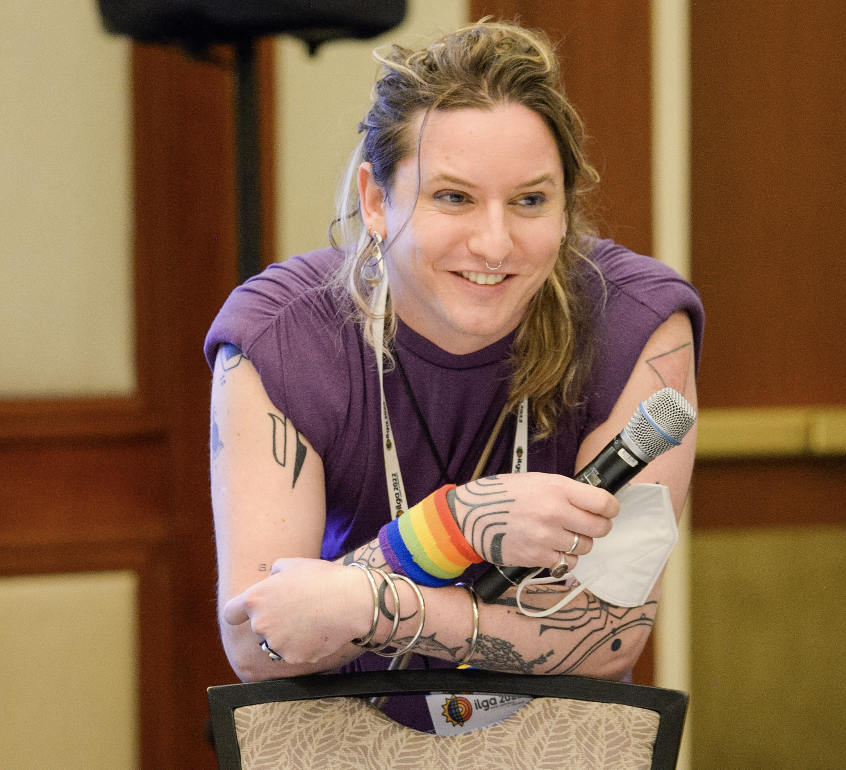 My non-binary journey dates back to some of my oldest memories I have as a child. Like many queer kids, I enjoyed playing with my mom's clothes, makeup, and jewelry. I was even more obsessed with my Jewish grandmother's wardrobe, a true fashion icon. The desire to explore and play with my gender was filled with guilt and shame at the time. Although I never wanted to conform to society's gender, among other standards, I did it for many years due to lack of information and safety reasons. I had no references to non-binary and queer lives during my youth in Brazil.

In 2008, I started also dating gay men and non-conforming people, and it took me ten years to feel comfortable with my femininity again. During this time, I began my activism while also working as a sex worker, and these experiences were critical to my process of growth and self-acceptance. Some of the most potent activists I met were trans sex workers who had no shame or guilt. In 2018, I had all the tools, language, and community I needed to explore my gender freely again. I joined the Radical Faery community and dared to live beyond the binary. To me, being non-binary is an ongoing process of re-birth, self-love, and healing that I am lucky enough to live. It's also a rocky road with many obstacles, but hey, let's celebrate for once… because today is International Non-Binary People's Day! And as ILGA World's Manager of the Gender Identity, Gender Expression and Sex Characteristics (GIESC) Programme, I want to share some of our plans moving forward. The GIESC team is relatively new within ILGA World yet made up of world-class activists fighting for gender equality and justice for trans, gender diverse and intersex people.

In the GIESC team, we all come from different backgrounds and lived experiences, countries, and regions, but we have an agenda in common that is guided by feminist principles. As much as we are concerned about the escalated violence, the global anti-gender backlash, and its immense impact on our communities, we are confident that by working with our members and allies, we are paving the way for a better future. Our first GIESC team strategy is currently being developed, and it will be pivotal to expanding our intersectional advocacy, research, and convening work. In this process, we value and welcome the community's participation in every step.

With a spirit of unity and solidarity, we will work tirelessly to end violence, discrimination and human rights abuses directed at trans, gender diverse and intersex people.

Happy International Non-Binary People's Day! You are valid and we love you.