Skip to main content
HRC 37 side event | Cultural rights and the right to freedom of religion and belief
Submitted by Daniele Paletta on Mon, 03/05/2018 - 08:36

Cultural Rights and the Right to Freedom of Religion and Belief: Universality, Indivisibility, Diversity and Religion & State Relationships 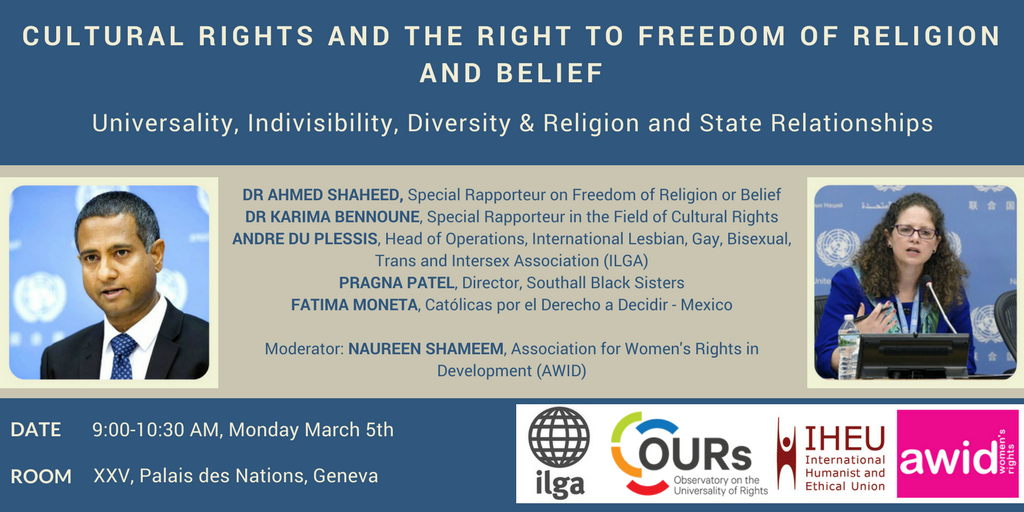 As the Vienna Declaration and Programme of Action articulated twenty-five years ago, all human rights are universal, indivisible and interdependent and interrelated. The principle of the universality and indivisibility of rights is a bedrock of the right to freedom of religion and belief and the right to culture.

Whilst international law is clear that the universality of rights cannot be undermined by limitations justified by reference to culture or religion, we are today witnessing an increase in anti-rights actors promoting anti-universalist initiatives at the national, regional and international levels to undermine equality for all, including religious, ethnic and cultural minorities; indigenous persons; and regardless of gender, sexual orientation or gender identity or expression.

In their work, the Special Rapporteur on freedom of religion or belief and the Special Rapporteur in the field of cultural rights have highlighted some of prevalent misunderstandings regarding these core human rights. Although some actors may cite to them to further their anti-universalist agendas, cultural rights and the right to freedom of religion and belief can never be used to undermine equality or to justify discrimination.

We are also today witnessing tensions and questions where these core human rights meet with rights relating to health, the rights of women, the rights of children, and freedom of expression. These intersections often provide a site for conflicting and competing understandings of language around secularism, universality of rights, and the notion of fundamental rights. They also highlight the role of the state in defining the boundaries of our interrelated rights.

In her report to the 72nd session of the General Assembly, the Special Rapporteur in the field of cultural rights emphasized the critical role that diverse forms of secularism can play in creating or preserving space for women and minorities to enjoy their cultural rights without discrimination, and in countering fundamentalist and extremist ideologies.

In his report to the 37th session of the UN Human Rights Council, the Special Rapporteur on freedom of religion and belief examined models of state/religion relationships. In the course of this examination, the Special Rapporteur observed that states which enforce an official religion often feature high levels of restrictions on freedom of religion or belief, and often discriminate against persons belonging to religious minorities, women, LGBTI persons, converts or non-believers.

Against this complex backdrop, it seems timely to examine the role of the relationship between religion and state, how it can contribute to fostering an environment that is supportive of the foundational principle of the universality and indivisibility of human rights, and to look at the understandings and political and social contexts that best promote freedom of religion or belief, cultural rights and diversity for all on an equal basis.

“The ever-evolving nature of state-religion relationships is of significance to those seeking to promote protections for freedom of religion or belief, because the degree to which States are entangled with various religions or beliefs has far-reaching implications for their disposition and ability to guarantee human rights, especially those rights exercised by persons belonging to religious or belief minorities.”  Ahmed Shaheed, Special Rapporteur on Freedom of Religion or Belief

Secularism finds its home in diverse forms in all regions of the world. It does not mean the absence of religion but rather a state structure that defends both freedom of expression and freedom of religion or belief…[t]he divide is not “between the religious and secular, but between the anti-secular and those with secular values”. Karima Bennoune, Special Rapporteur in the Field of Cultural Rights