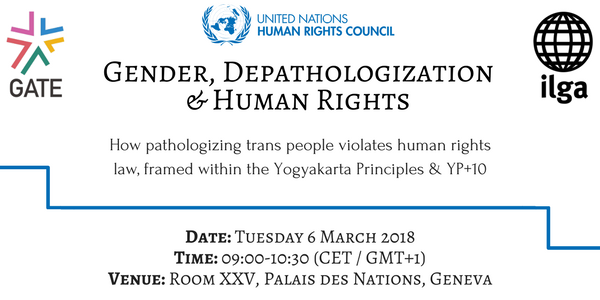 Pathologization of LGBT adults and children - branding them as ill based on their sexual  orientation, gender identity or gender expression -
has historically been, and continues to  be, one of the root causes behind the human rights violations that they face.
t is also an obstacle to overcoming negative attitudes, stereotypes, and the multiple barriers
for the realization of LGBT people’ s most fundamental human rights.

Pathologization is the psycho-medical, legal and cultural practice of identifying a feature, an individual or a population as intrinsically disordered. In this sense, trans and gender diverse people are routinely defined as inherently pathological just because of the way in which they identify and express themselves: their gender is normatively defined as a disorder in itself.

The UN has documented a range of violations against trans people, including, inter alia, killings, attacks, sexual assault, police violence, arbitrary detention, forced medical treatment, lack of legal gender recognition, abuses of sexual and reproductive rights, as well as discrimination in the areas of education, access to public facilities and services, employment, travel and access to justice. Importantly, UN and regional human rights bodies have linked these violations directly to the continued use of discriminatory diagnostic classifications and other laws and policies that pathologize gender diversity.