This article first appeared in an edited version on Openly,
and was authored by Daniele Paletta (Communications Coordinator at ILGA World)

Raise your hand if you are on social media.
And you have never been harassed.
Or no one has ever had a go at you for just expressing your opinion.
Or you have never thought that you needed to take a break from such a toxic environment.

This week, the UN Human Rights Council discussed the Forum on Minority Issues’ recommendations to tackle hate speech on social media. The document includes LGBTI people among the populations who are particularly vulnerable to online hostility.  This is not the first time that the UN acknowledges the issue: will States and social media companies listen at last?

The United Nations describes hate speech as “any kind of communication that attacks or uses pejorative or discriminatory language with reference to a person or a group on the basis of who they are”. This is language that has the potential to generate intolerance and hatred, and our communities are constantly confronted with it.

Like for other groups who risk marginalisation in everyday life, the online space has been revolutionary for LGBTI people: it has helped build communities.

But with more visibility, also came backlash: 84% of respondents to a survey conducted by ILGA World in 2020 said that those spaces have exposed them to hate speech and threats.

Any LGBTI person who also embodies other identities that are particularly subject to hostility is even more likely to know how it feels to be targeted online.  For many populations within LGBTI communities, hate speech is an inescapable daily reality - be it for women, people of colour, persons living with HIV/AIDS, youth, older persons, migrants, people with disabilities, and more.

In many states, such actions are indirectly legitimised by state officials who use also social media to dehumanise our communities and scapegoat us for political gains. This fosters a climate of impunity for others – something that can escalate into a toxic online space of hate, or even real-world harms such as physical attacks, severe mental anguish and suicide. Criminalisation on grounds of sexual orientation or gender identity can have the same effect.

Hostile narratives were not born with the internet.  However, unprecedently large audiences are now exposed to them through social media, and spreading misinformation is incredibly easy whenever hostility replaces debate.

With more people forced to engage online, attacks against the LGBTI community intensified during the Covid-19 pandemic, further disrupting what was left of any safe space.

The UN Forum on Minority Issues rightfully called on States and tech companies to “ensure an inclusive access to the digital world”. However, hate speech is consciously hampering such opportunities: it is yet another form of intimidating LGBTI and other communities back into silence.

Trans persons are currently particularly under attack, especially whenever legitimate debates on legal reforms are used as a pretext to deny trans people their right to existence. 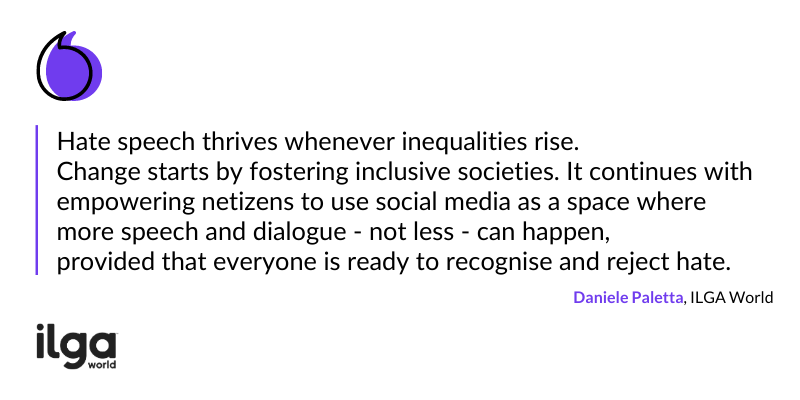 Clearly, neither withdrawing from online spaces nor going back to the closet are viable options. But enduring constant abuse can be extremely difficult, especially when perpetrators don’t seem to be sanctioned for their behaviour. It is high time for States and social media companies to take action.

Platforms should be held to account and improve their content moderation policies: harmful content often remains accessible for far too long - especially when published in non-Western and minority languages – further endangering those who are being targeted.

The business of social media platforms depends on data analysis: they should investigate how exactly hate speech targets each community. If access to this data were open, States would have further evidence of the need to improve laws and policies on the matter.

Let us be clear: everyone is entitled to their opinions, but not to destroy others in the process. Freedom of speech is precious, but this cornerstone of the international human rights framework must never become an excuse to legitimise hatred and intolerance.

Hate speech thrives whenever inequalities rise. Change starts by fostering inclusive and just societies. It continues with empowering netizens to use social media as a space where more speech and dialogue - not less - can happen, provided that everyone is ready to recognise and reject hate. This is not a responsibility of governments and platforms alone: all of us share virtual spaces, and we all must act.

Addressing hate speech means keeping it from escalating into incitement to discrimination, hostility and violence. It is a human rights issue, and a matter of basic human decency.