To mark this historic event, four human rights organizations released a joint report today detailing the establishment and confirmation of the mandate at the United Nations (UN) over the 2016 UNGA. 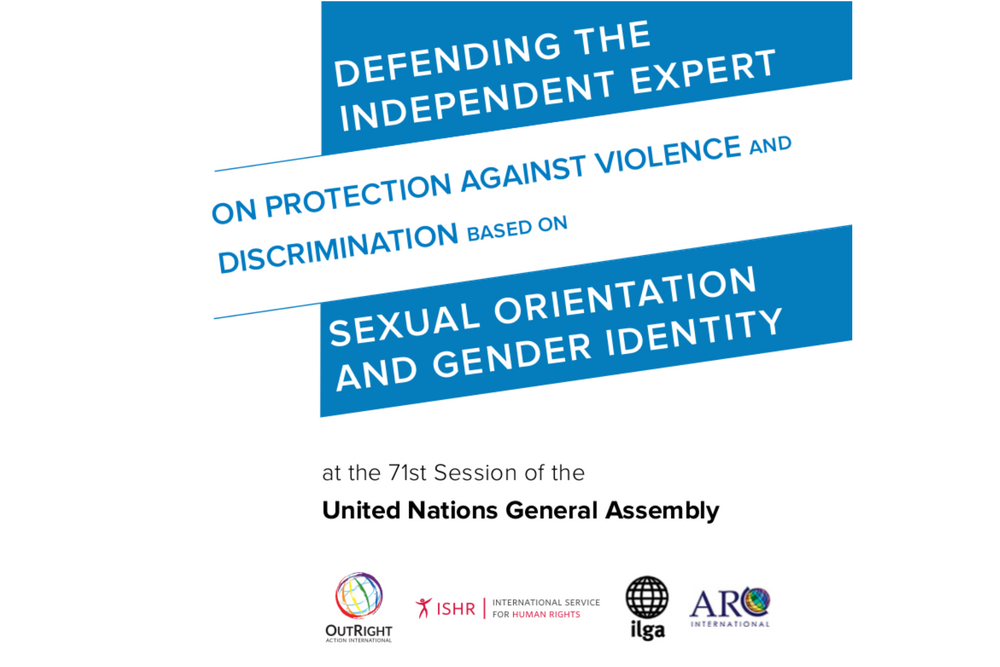 The IE SOGI mandate was created through UN Human Rights Council resolution A/HRC/RES/32/2 in June of last year and was confirmed through six separate votes over the UNGA session in 2016. Despite this comprehensive process of approval, some UN Member States insist on opposing any decision that links sexual orientation, gender identity and expression, and sex characteristics to international human rights protection. Just last week, a delegate from Egypt addressed a committee of the UNGA claiming to speak on behalf of Belarus, Russia, and the Organization of Islamic Cooperation (OIC) States, minus Albania, and stated:

“Our position on the matter is clear, that we do not recognize the mandate of the independent expert and therefore are not in a position to engage, interact or cooperate with the mandate holder. While reiterating our firm commitment to combat different forms of violence and discrimination, we believe that the resolution establishing the mandate adopted by a margin vote is highly divisive. Moreover the introduction and imposition of controversial notions outside the internationally agreed human rights legal framework contradicts the fundamental universality and would lead to polarization.”

States such as Egypt construct this false narrative at the UNGA by taking advantage of a loophole in the rules that allow regional groups to make statements even if consensus has not been reached within the group on the issue in question. Last year Egypt pushed the African Group and the OIC to continually table group statements against the mandate despite members of the group not agreeing on the stance. The report released today exposes this strategy as misrepresentation and myth building. It breaks down and analyzes each vote that took place at the UNGA last year, revealing the comprehensive cross-regional support for the IE SOGI Mandate including from States in the OIC and the African Group. For example, South Africa, a member of the African Group, supported the establishment of the SOGI IE and stated;

“The Bill of Rights is very clear about the South Africa we fought for, were imprisoned for and were exiled for, a South Africa without discrimination. The question is one of our values and beliefs and even if we are alone on the continent we will stand and fight it (discrimination against LGBTI persons). South Africa will vote yes based on our constitutional imperative.”

UN Member States across the world stood up for the integrity of the human rights system during the process, and by doing so showed their support for the IE SOGI position. This included countries across the Asia-Pacific such as Japan, whose delegate stated,

“Picking and choosing the outcomes of the Human Rights Council and blocking the ones which are not favorable for some of the delegations in the General Assembly undermines the discussions and the decisions made in the Human Rights Council and it therefore sets a dangerous precedent. My delegation is not in the position to support such an attempt. My delegation would like to support the amendment tabled by the distinguished delegation of Argentina, and I strongly urge other delegations to do so.”

The report reveals strong leadership and support for the mandate from the Global South and in particular the key role of several Latin American States such as Mexico:

“The issue being that of the mandate of the Independent Expert on protection against violence and discrimination based on sexual orientation and gender identity. And I think here we need to clarify something very important, this is a very complex and delicate subject. This has been said, but I think it’s worth reiterating here so that it is very clear: we’re talking about nondiscrimination – nondiscrimination. And for us, it is extremely difficult to understand that anyone could question the human right to nondiscrimination on any basis whatsoever.”

Civil society played a strong and crucial role in defending the mandate with representation from every region of the world. Notably, civil society mobilized vigorously across all aspects of the hostile attacks, including in the development and distribution of two open coordinated letters addressed to Member States of the United Nations urging their support for the IE SOGI. The first letter – initiated during the debates in the Third Committee – was signed by over 850 organizations representing over 157 countries. The contents of the civil society report offer an evidence base for countering arguments based on misinformation, fear and generalization. The voting records, analysis and transcripts can offer guidance for planning future international, regional, and national advocacy on the human rights of LGBTI people.