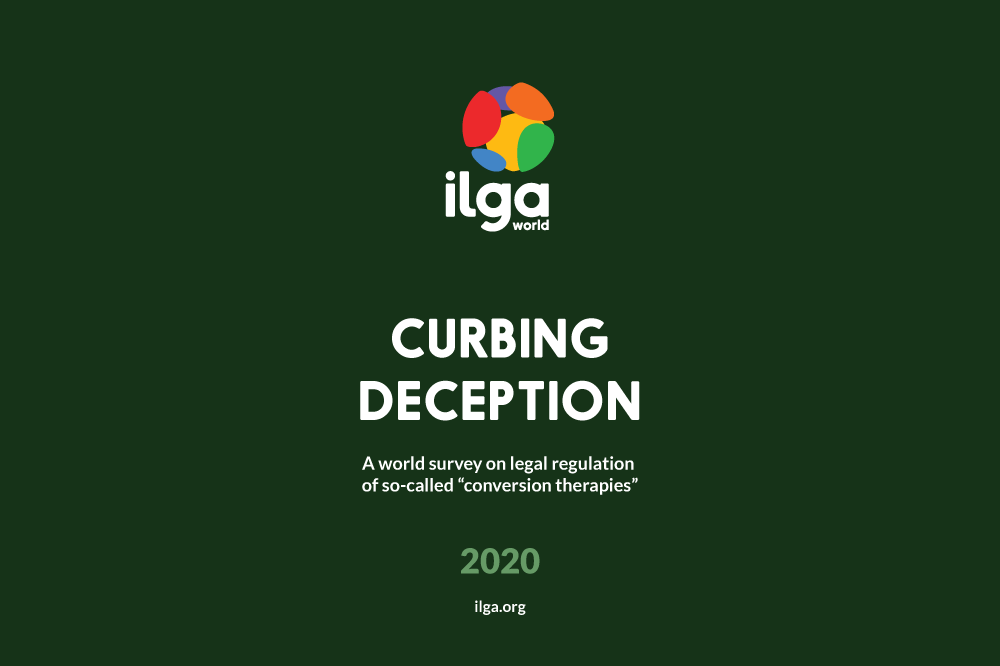 The ILGA World Curbing deception - A world survey of legal restrictions of so-called ‘conversion therapies’ report was released in February 2020.

What will you find in the report?

Chapter 1 deals with the complexities around terminology and explores the underlying assumptions of many of the terms we commonly use when talking about efforts to change a person’s sexual orientation, gender identity or gender expression.

In Chapter 2, the report walks our readers through a vast field of practices and techniques that have been used in the past — and continue to be used today — for the purpose of “rendering” lesbians, gays and bisexuals heterosexual, to prevent trans youth from transitioning or make trans people de-transition, or to force our gender expressions or roles to fit and align with the social binary stereotypes of masculinity and femininity. Our readers will be able to explore and become aware of how science, culture, religion, prejudice and sheer ignorance have come together to form a disturbing mosaic of damaging, hurtful and even bizarre attempts to erase us from our families and communities. For too long many of these attempts took place (and still occur) under the legitimising cloak of science and, in many places, they still enjoy that impunity. Note: Survivors of these practices may find parts of this chapter upsetting.

Chapter 3 provides a quick glance at the global consensus against sexual orientation, gender identity or gender expression change efforts (SOGIECE) and the main driving forces behind the progress made thus far in the battle against these pseudo-scientific practices. Annexes 1 and 2 expand this chapter with a worldwide list of professional associations that have repudiated SOGIECE and a list of former prominent leaders that have come out to reject their effectiveness and to warn about the harms produced by many of the techniques they created, or they were involved in.

Chapter 4 maps the array of SOGIECE proponents as we may find them today. This chapter is just an exploratory exercise and could be further developed to include many more proponents.

Chapter 5 is an attempt to map many of the rights that have been discussed when restrictions to these deceptive practices became laws, regulations or position statements, or upon being challenged before local courts. The relevance of many of the arguments discussed in this chapter will greatly depend on elements that lie beyond the scope of this report, such as local legislation and caselaw, constitutional clauses, and even the level of influence of religious laws and regulations in each country.

Chapter 6 explores the elements of a multifaceted strategy to restrict SOGIECE including legal bans but going beyond legal reform. Complementary initiatives, legal or otherwise, are explored. Additionally, the role of other relevant stakeholders, including the media and National Human Rights Institutions, is also discussed.

Chapter 7 analyses the legal restrictions that are currently in force around the world, both at the national and the sub-national level. Our readers will be able to become familiar with how these laws operate, how they protect victims and how they regulate, among other things, the professional conduct of mental health professionals. Additionally, this chapter maps ongoing discussions, initiatives and bills currently under debate in at least 10 countries at the national level, reviews relevant caselaw from the United States of America, China and Costa Rica and lists a wide array of statements and interventions by governmental bodies and officials against SOGIECE.