Skip to main content
Champions of change - Human rights defenders, at the forefront of democracy and development
Submitted by Daniele Paletta on Thu, 11/09/2017 - 09:09

Brussels, November 9th, 2017 - In the past year, the situation of democracy and human rights around the world continue to deteriorate at an alarming rate. Political and civil space is increasingly shrinking in numerous countries, and economic, social and cultural development often is uneven and does not include vulnerable groups. In a growing number of countries, the pressure on human rights defenders has continuously increased, and the international community has failed to bring stability and peace to regions of conflict, in sharp contrast with the efforts undertaken in order to achieve the Sustainable Development Goals.

Human rights defenders, including women and LGBTI defenders, are grassroots champions of change, and crucial pivotal actors in the drive to tackle the crises faced by the international community. In order to address the root causes of crises such as the spread of conflict - which result in forced displacement and refugee movements - radicalisation and environmental breakdown, we must provide support to those who are active on the ground fighting for positive change and inclusive development. Human rights defenders across the world often put their lives and well-being on the line to push for democratic governance, sustainable development, gender equality and poverty reduction.

According alerts issued by four international human rights organizations (1), in 2017, more than 650 defenders have faced severe attacks and threats, and at least 400 have been subject to judicial harassment. Democracy and human rights are only possible when courageous individuals and communities are willing to stand up for them. This is what makes defenders a central keystone to development, peace-building, democratisation, and resilience.

Authoritarian and repressive regimes around the world have become better organised, more sophisticated, and more effective at impeding the work of human rights defenders through surveillance, defamation, restrictive legislation including on access to funding, intimidation, and harassment, as well as arrests, disappearances, torture and murder. Multinational corporations and private interests are also often implicated in repression and violation of human rights for economic gain.

As defenders face ever increasing threats, they require protection in order to continue to do their work. Since its launch in October 2015, ProtectDefenders.eu, the EU Human Rights Defenders Mechanism implemented by international civil society, has worked to provide support for human rights defenders under increasing threat, while recognising and legitimising their role as central promoters of development.

ProtectDefenders.eu calls upon the EU and its Member States to:

2) Develop specific actions to ensure the effective implementation of SDG 16 on promotion of peaceful and inclusive societies, in particular, by ensuring a safe and conducive environment for human rights defenders, ensuring that the practice of killing human rights defenders is stopped, and that the perpetrators are prosecuted and held accountable.

3) Guarantee that all development cooperation grants and loans implement a mandatory human rights impact assessment and ensure policies for the protections of HRDs working in the context of development projects.

4) Engage constructively in the development of binding legal instruments on business and human rights ProtectDefenders. 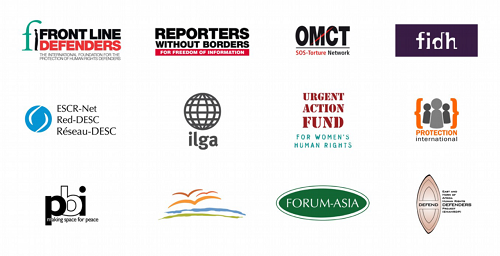 (1) Front Line Defenders, RSF and OMCT-FIDH in the context of the Observatory for the Protection of Human Rights Defenders