Skip to main content
Sport, LGBTI and Human Rights – Statement by ILGA on joining the Centre for Sport and Human Rights
Submitted by Daniele Paletta on Fri, 12/14/2018 - 20:15

On 14 December 2018, ILGA joined the Advisory Council of the Centre for Sport and Human Rights, at UNESCO Headquarters in Paris, France.

Represented by ILGA Executive Director, André du Plessis, and the Coordinator of ILGA’s Gender Identity and Gender Expression (Trans) Programme, Zhan Chiam, this is its statement at its joining.

ILGA – the International Lesbian, Gay, Bisexual, Trans and Intersex Association – is the world federation of LGBTI organisations dedicated to achieving equal rights for L,G, B, T, and I people (and to be clear this includes all the many other letters that people use to describe the diversity of their sex, sexuality and gender, wherever they may be). We work on behalf of our membership: of more than 1500 member organisations from 150 countries and territories. We are an organisation not just working for these member organizations, but we are led by them through an elected board and committee system at the regional, global and population group level. And we’re pleased to announce that youth groups are soon to also have a specific elected role in our representative structure.

With a headquarters in Geneva, part of our role is to speak and advocate at international fora such as the United Nations, and also at the many other international organizations that exist – many in Switzerland – making sure that LGBTI persons are included in global discussions. We also have significant expertise in interpreting, training and working in International Human Rights Law as it relates to LGBTI issues and are interested in what this law actually means for people everywhere.

ILGA is publicly committed to human rights, and all our members must support our aims and objectives, which include promotion of the universal respect for and observance of all human rights and fundamental freedoms for all people.

We are so grateful that the Center for Sport and Human Rights has been established and we are delighted to (hopefully) be joining this council to advise the Directors on the direction it takes. Congratulations all who have been involved in its establishment.

The principles that it is founded on are strong and we are committed to them. We’re glad that principle 4 is there, which notes that affected groups should have a voice in decision-making, and we want to make sure that there are strong LGBTI voices in this space.

Many of our members are working on the issues around sports and human rights. Some of our members, such as The Gay Games, or the Out Games, host LGBT-specific sports events, with a strong human rights component. Some members are working on providing support before, during and after mega-sporting events, such as groups in Russia during the recent World Cup. Trans and intersex groups worldwide are defending the rights of trans, gender non binary and intersex athletes and amateurs. In Latin America, others are working to challenge the societal hyper masculinities that cause homophobic chanting in stadiums. In Africa, queer groups are using soccer to open conversations around diverse sexualities and – thankfully – to also just have fun. We hope that you will come to Wellington, Aotearoa/New Zealand, from 18 to 22 March 2019 for our biannual World Conference where LGBTI defenders from around the world will meet and share strategies on the whole range of LGBTI activism. 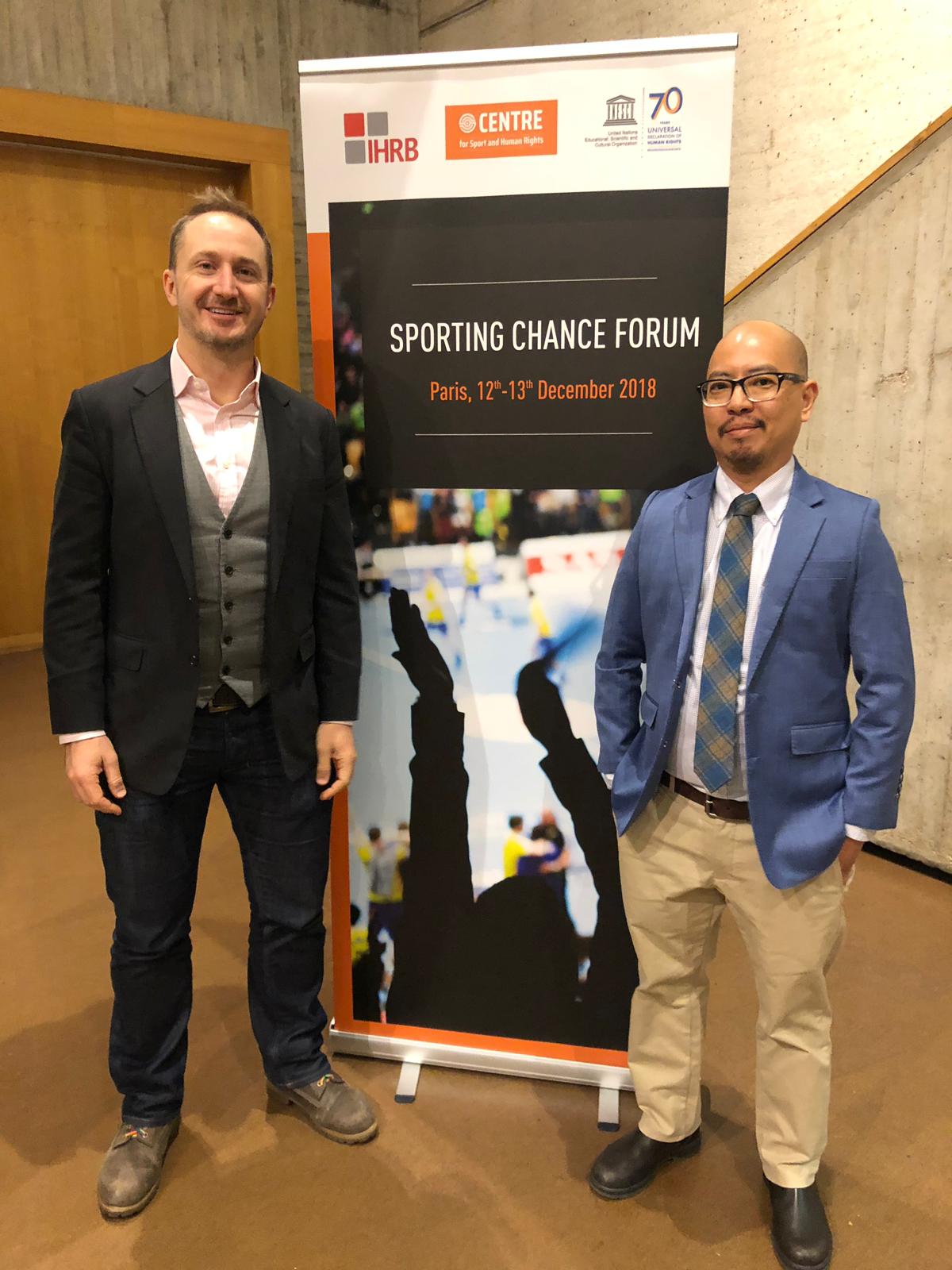 Some conversations in this area will be difficult. For example about how do we practically deal with gender diversity in the highly gender-binary world of sport? Or how do we actually handle cultural taboos and sensitives in more conservative cultures around issues that touch on our very nakedness as human beings? These conversations can all too easily become about medicine, religion, testosterone levels, geo-politics, surgeries... At the outset, however, we ask that this Centre continue to be the place where we keep the conversation human. That we continually place human beings at the centre of the discussion.

Too many LGBTI persons are adversely affected by sports. Many are nameless simply because they were too scared to share their stories, or their light went out too soon: the queer kids that commit suicide after bullying, mocking or abuse in the locker room at school. The activists who are arrested for waving a rainbow flag. The athletes who are investigated and humiliated just for being who they are. The local LGBTI people who maybe enjoy a brief moment of tolerance when a country hosts an event, only to be shunned or shamed shortly after.

We’re not here to name and shame. But we are here to have conversations, some of which will be difficult. We will draw on our own expertise and – crucially – the rich experience, insights and expertise of our membership and LGBTI persons everywhere. We commit to working with all actors involved in sport to build capacities, share knowledge, and help to shape and strengthen mechanisms for transparency and accountability.

And I will finish by simply saying that we certainly do not see sport only through the lense of a place where human rights violations can – and do – occur. I’m glad that principle 1 of the Sporting Chance Principles is that Sport has the inherent power to create positive change. We queer people understand powerfully that change at the level of hearts and minds – which is perhaps the only change that has a lasting effect – happens through speaking a language that others can understand and resonate with. For some people, a human rights framing is enough. But for others, hearing human rights issues expressed in the language of their faith, their tradition, their values is a better way to resonate. Sometimes that language is the language of sport – a language where we can show inclusion, diversity, respect, fun, fairness, solidarity and dignity – together.