Skip to main content
A year at a glance: UN Special Procedures push for better LGBTI protection across a range of topics
Submitted by Kseniya Kirichenko on Thu, 12/19/2019 - 10:00

An updated series of factsheets by ILGA World and ISHR show that UN Special Procedures have regularly raised concerns regarding human rights related to sexual orientation, gender identity, gender expression and sex characteristics (SOGIESC) in 2019, including three experts raising these issues for the first time.

An ILGA World and ISHR analysis shows that, over the past year, thematic UN Special Procedures have consistently pushed for better protection of the human rights of LGBTI persons. The observation follows an update of ILGA World and ISHR’s series of factsheets, which list the references and recommendations made regarding LGBTI persons and SOGIESC in communications, thematic reports and country visits by mandate holders. In addition to the 34 mandates who had already made progress in terms of addressing SOGIESC issues since 2011, three new Special Procedures – the Independent Expert on albinism, the Special Rapporteur on the right to food and the Working Group on the use of mercenaries – started to include LGBTI topics in their activities.

We welcome the ongoing attention that these experts are paying to SOGIESC human rights issues, including particular attention to the situation of LGBTI activists and growing recognition of intersectional problems, such as those of LGBTI migrants/refugees. At the same time, we encourage the mandate holders to strength their analysis of specific populations within LGBTI communities, such as LBQ women, trans or intersex persons, and to look into the situation of LGBTI persons who are not necessarily activists.

Find out more about the trends in 2019 below! You can find the updated factsheets here.

Which experts include LGBTI issues most regularly?

The mandates that made the most regular references to SOGIESC issues were: 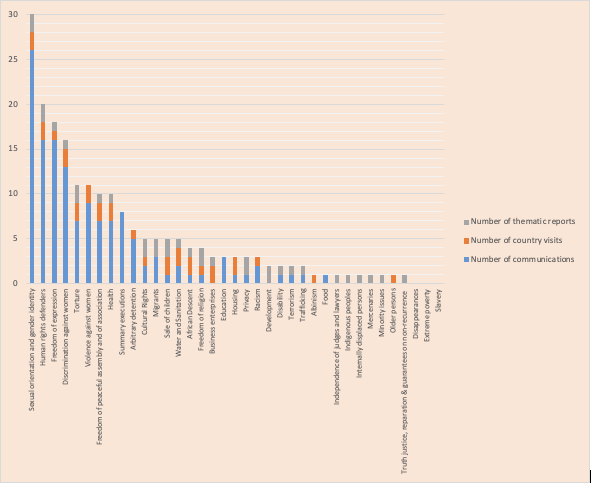 Which parts of the world are getting most attention?

Geographically, the mandates of Special Procedures cover all the parts of the world, and they made SOGIESC-inclusive communications or country reports on states from all five UN geographical clusters[3].

Taking into account the local situations and regional trends, this distribution is generally balanced. The highest number of references were made on countries from the Asia-Pacific Group (15 items), followed by the African Group (13 items), the Latin American and Caribbean Group – GRULAC (12 items), the Eastern European Group – EEG (10 items), and then the Western European and Others Group – WEOG with only 8 items. 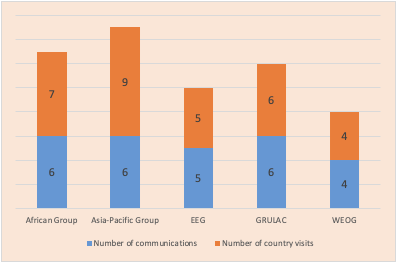 2019 SOGIESC communications and country visits – According to UN regions

However, from the perspective of ILGA World’s regions (which are different from the UN geographical distribution) the whole picture changes. As could be seen from the chart below, most of the SOGIESC-inclusive country reports and communications by Special Procedures concerned Europe and Central Asia (15) and Africa (13), with Asia and Latin America and the Caribbean with 12 each, followed by North America (5). Oceania received only one SOGIESC-inclusive reference, in a country visit to Fiji, and no communications. It appears that LGBTI advocates and members of ILGA World could take into account this disparity in order to support and encourage those from underrepresented and/or highly affected regions or subregions. 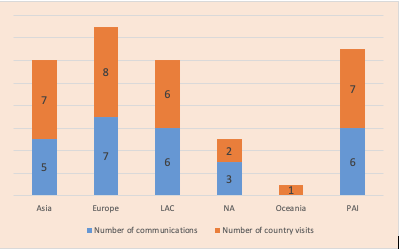 2019 SOGIESC communications and country visits – According to ILGA regions

29 new communications on SOGIESC – letters concerning allegations of human rights violations – were sent by thematic mandates for the period from 1 June 2018 to 31 May 2019 and published in three HRC reports in 2019.

While most of the communications were addressed to states, one was sent to the UN Refugee Agency – UNHCR, and another to the International Association of Athletics Federations – IAAF.

When it comes to specific populations and topics, the vast majority of communications were related to the situation of LGBTI human rights defenders and challenges they face due to their activities. Some communications went beyond this important area, and examined other areas of human rights where LGBTI face challenges. Only one communication concerned intersex persons specifically. Three communications referred to discrimination and violence against LGBTI migrants or refugees, and two communications raised the problem of criminalisation of consensual same-sex sexual acts. Four communications addressed limitations on dissemination of SOGIESC-related information, particularly in education.

In 31 reports on visits thematic mandates made to 25 different countries, they referred to LGBTI issues.

Special Procedures also included SOGIESC elements in their thematic reports to the Human Rights Council and General Assembly. 34 reports (almost 50% of all the thematic reports presented in 2019) mentioned at least some LGBTI topics, with 11 of these reports – set out in the table below – including good or strong references to LGBTI populations.

[1] Communications published in HRC reports in 2019 (which are communications sent between 1 June 2018 and 31 May 2019). The updated factsheets, however, include information on those communications which have been published between January 2011 and October 2019.

[2] One item (one reference) is one SOGIECS-inclusive thematic report, country report or a communication on LGBTI topic.