In 2016 alone, the United Nations Treaty Bodies have issued 77 Concluding Observations including references to sexual orientation, gender identity and expression, and sex characteristics: that figure has almost doubled compared to 2014, when 41 recommendations were made. The percentage of country reviews that contain such recommendations has also increased dramatically, moving from the 34% recorded in 2014 to 53% in 2016.

“These recommendations can be crucial foundations for LGBTI activists to advocate human rights for our communities,” explains Kseniya Kirichenko, who leads the Treaty Bodies and Special Procedures Programme at ILGA and authored The United Nations Treaty Bodies: References to sexual orientation, gender identity, gender expression and sex characteristics – 2016. “The importance of civil society in bringing about change can’t be overstated, as it continues to provide quality advocacy to encourage more specific recommendations, prompting human rights bodies to address violations against LGBTI persons and communities worldwide.”

The Treaty Bodies are independent committees that monitor State compliance with international human rights law treaties. Since May 2015, ILGA has implemented a programme to assist LGBTI civil society as it engages with these bodies, gaining insight into the approach of the seven committees most relevant to LGBTI and gender non-conforming persons.
ILGA’s The United Nations Treaty Bodies: References to sexual orientation, gender identity, gender expression and sex characteristics stems from our daily engagement with these human rights bodies, providing a comprehensive annual compilation and analysis of all the SOGIESC references they made in 2016. 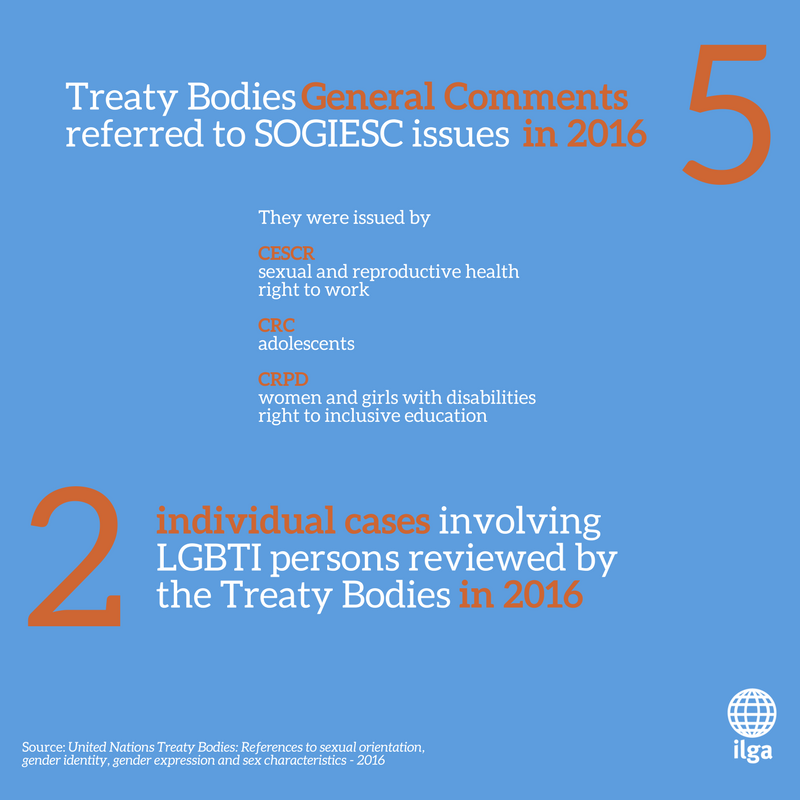 “Throughout the year, the Committees have showed promising progress especially in how they addressed ‘conversion’ therapy, family diversity, hate speech and hate crimes, as well as sex characteristics, gender identity, and intersections between SOGIESC and disability,” further explains Kirichenko. “Such developments prove that positive shifts are achievable at least at the UN level, and under-represented populations can be recognized and heard in this space.”

This progress, however, does not come without challenges. While 65 intersex-inclusive references were made in 2016, showing a constant increase since the 14 issued in 2014, most of them were folded into the LGBTI acronym, and only a small part of them were intersex-specific – an inclusion that may end up making the specific needs of intersex populations invisible. 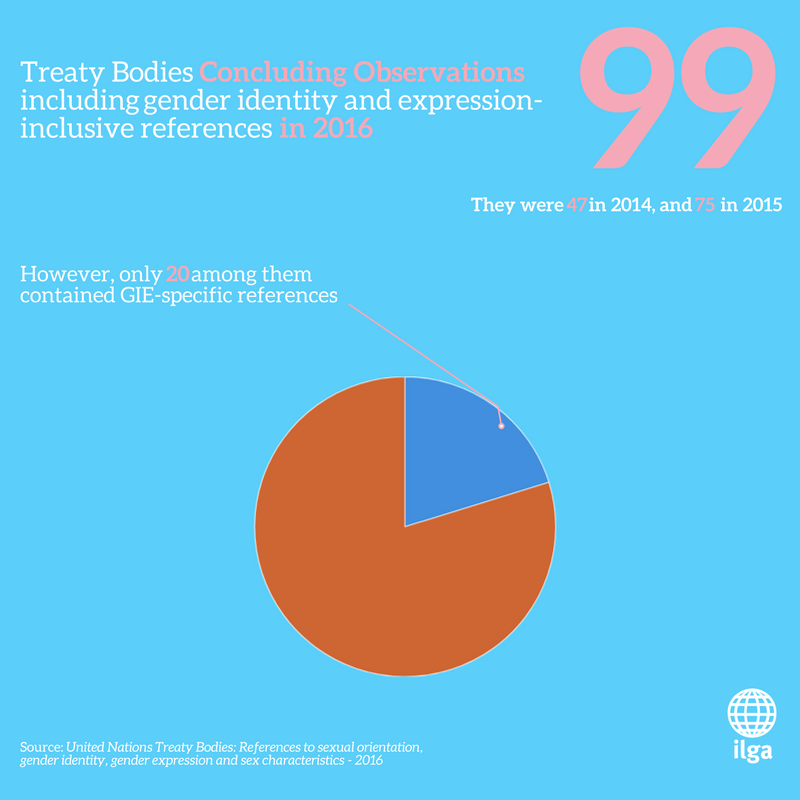 Despite huge step forwards, similar concerns are also present when considering how gender identity and gender expression issues are addressed within the Treaty Bodies: only 20 of the 99 recommendations issued on these matters in 2016 were trans-specific, mainly focusing on legal gender recognition and violence while often leaving other topics – such as discrimination, socio-economic status or access to specific health services – out of the agenda.

And even more challenging appears to be particular problems faced by lesbian and bisexual women. Out of all SOGIESC references made by the UN committees in 2016, there was only one stand-alone sentence addressing “corrective rapes” towards lesbian women in Namibia.

“Our study on SOGIESC-related work of the UN Treaty Bodies shows how exciting, promising and effective, but also sometimes unpredictable and discouraging, engaging with the committees can be,” commented Ruth Baldacchino and Helen Kennedy, co-secretaries general of ILGA. “The progress documented here is definitely encouraging, but we know that it will only be meaningful to the lives of LGBTI people if the committees’ recommendations are actually implemented: and grassroots activists must be equipped with the resources and skills to do so. We hope that our research will be a useful and empowering tool as they engage with these UN mechanisms.”