Skip to main content
HRC 38 side event | Yogyakarta Principles Plus 10 and the protection of the rights of trans and gender diverse peopl
Submitted by Daniele Paletta on Wed, 06/20/2018 - 16:01

Side event - 38th session of the UN Human Rights Council

Co-sponsored by: ISHR; Permanent Mission of the Federal Republic of Germany to the Office of the United Nations and other International Organizations

The event will be livestreamed at facebook.com/GATEOrgOfficial 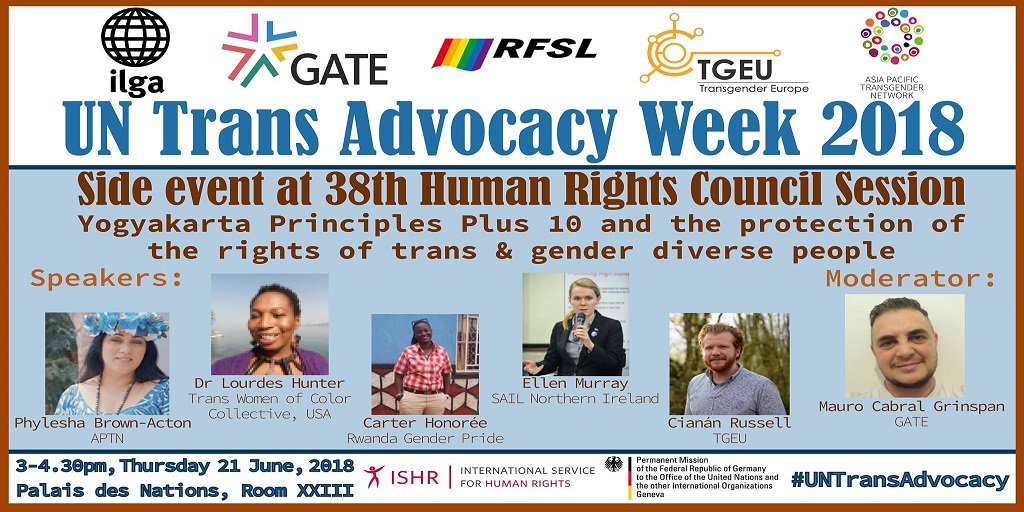 The Yogyakarta Principles on the Application of International Human Rights Law to Sexual Orientation and Gender Identity (YP) were launched in 2007.
During the following years, they have become an indispensable resource in defending, promoting and advancing human rights around the globe. Ten years later, it was clear that in order to expand their capacity to mobilize change in a rapidly evolving world, the original YP had to be revisited. In 2017, a group of experts produced a supplement to the existing document, known as the Yogyakarta Principles Plus 10 (YP+10), which introduces new definitions, new Principles and new State obligations based on intervening developments in international human rights law.

One of the central goals of the original YP  was to provide clear definitions for two key concepts: exual orientation and gender identity. The same goals oriented the production of the YP+10, acknowledging from the very beginning the need to explicitly include two other relevant concepts: gender expression and sex characteristics.

Human rights issues affecting trans and gender diverse people were articulated through the YP; however, the inclusion of more specific conceptual tools made it possible to expand the range and depth of those issues in the context of the YP+10. The new text includes, for example, concrete State obligations to fulfil the rights to legal recognition, bodily and mental autonomy, protection from poverty, and access to sanitation and truth.

This side event will address those supplementary Principles and obligations, relating them to the lived realities of trans and gender diverse people around the world and exploring the increased utility of both YP and YP+10 to dismantle systems, practices, and prejudices that promote and inflict human rights violations based on gender identity, gender expression and sex characteristics worldwide.