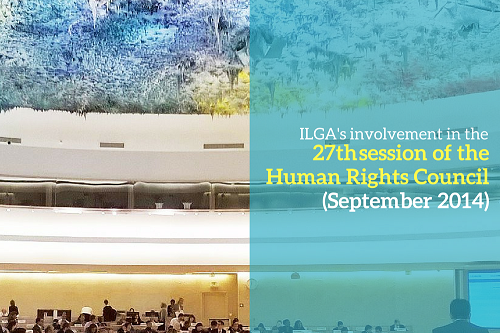 ILGA's involvement at the 27th session of the Human Rights Council (HRC):

This session was notable as the session where the UN’s second resolution on Sexual Orientation, Gender Identity and Human Rights was passed.

ILGA was involved in helping coordinate and lead concerted lobbying in the weeks before the HRC, working in coalition with others to encourage leadership amongst governments to bring the resolution. The resolution was eventually brought by Brazil, Chile, Colombia and Uruguay.

ILGA was also involved during the HRC to encourage governments to vote in favour of the resolution or, if that was not possible, to abstain. To do all this, ILGA worked with other organizations having funding to bring an agreed, diverse, strategic and informed group of human rights defenders to Geneva, pooling resources. Human rights defenders were in Geneva in four staggered tranches: a week before the council started, and then during each of the three weeks of the HRC itself.

The primary activities during this period were meeting the lead sponsors of the resolution, meeting “swing” countries to persuade them to vote in favour, attending and contributing resolution negotiations, meeting with civil society present in Geneva to share strategies and information, preparing information and briefing notes for delegations, liaising with defenders in-country to ensure that messages were transmitted to their capitals to vote in favour (or abstain) and communicating to the various list serves important developments.

Strategies were made particularly complicated by the bringing of 7 hostile amendments to the resolution, each of which was eventually defeated. The final vote was a significant improvement on the previous vote: 25 in favour (23 in 2011), 14 against (18 in 2011) and the remainder abstentions or absent from the room.

PANEL DISCUSSION ON THE PROTECTION OF THE FAMILY AND ITS MEMBERS

In a joint statement, ILGA, along with Amnesty International, Arc International, Article 19, COC Nederland, Federation for Women and Family Planning, Outright Action International (formerly IGLHRC), ISHR, Akahatá, ICJ, Point of View, and Partners for Law in Development, said that families came in a diversity of forms. A right- based approach towards the protection of ALL families was crucial to ensure the effective protection of those that were more vulnerable. "Marital rape, domestic violence and child abuse remained unfortunately rife in all regions of the world, patriarchal laws, policies, practices and traditions continue to deny women equality within the family, and LGBTI persons are sometimes disowned, or subject to abuse, forced to undergo involuntary psychological or medical treatment, and are at greater risk of homelessness or suicide."

ITEM 8: FOLLOW-UP TO AND IMPLEMENTATION OF THE VIENNA DECLARATION AND PROGRAMME OF ACTION

This joint statement called on the Council to adopt the draft resolution to fight discrimination against lesbian, gay, bisexual, transgender, and intersex people. The resolution would provide the means for the Council to hold a constructive dialogue on the human rights of LGBTI persons.

INTERACTIVE DIALOGUE WITH THE SPECIAL RAPPORTEUR ON HUMAN RIGHTS IN CAMBODIA

Canadian HIV/AIDS Legal Network, in a joint statement with ILGA, said that Cambodian lesbian, gay, bisexual and transgender persons were severely discriminated against, abused and subjected to socio-economic exclusion in families, communities and workplaces. Click to read the statement.

GENERAL DEBATE ON THE UPR

ILGA said that intersex people faced violence and discrimination everywhere. Medically unnecessary interventions were being carried out without informed consent to align intersex people’s bodies with gender standards. The Special Rapporteur on torture had expressed concerns about this practice. Intersex athletes were also victims of rights violations.

DEMOCRATIC REPUBLIC OF THE CONGO

This joint statement by Action Canada for Population and Development in collaboration with the Sexual Rights Initiative (SRI) highlights the persecution suffered by the lesbian, gay, and bisexual population in the Democratic Republic of Congo.  Click to read the statement.

ILGA, in a joint statement with Minority Rights Dominica, expresses disappointment with the response given by Dominica on recommendations made on the issue of gender identity and sexual orientation. Lesbian, gay, bisexual and transgender persons continued to suffer from abuses and the Association encouraged the Government to repeal the necessary laws.

ILGA hosted a side event entitled “The Time Has Come” that was chaired by a representative from ARC International and focused on giving the message as to why and how the HRC should act now.  Panelists included LGBTI rights defenders from Point of View (India), Pan Africa ILGA, Global Action for Trans Equality (GATE), and Organization Intersex International (Australia).