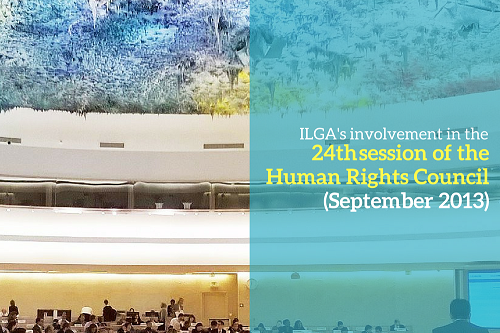 ILGA’s involvement at the 24th session of the Human Rights Council (HRC):

In this statement, ILGA brings to the Council's attention, the human rights situation of LGBTI people. Acts of violence and discrimination committed against individuals because of their perceived or actual sexual orientation and gender identity occurs in all regions of the world. LGBTI persons continue to struggle to be who they are and live free from discrimination, fear, and violence. IGLA urges the Council to remain committed to protecting and promoting the human rights of LGBTI people.

ITEM 8: FOLLOW-UP AND IMPLEMENTATION OF THE VIENNA DECLARATION AND PROGRAMME OF ACTION

In this statement, ILGA states that the Council has heard many times about the increased human rights violations of lesbian, gay, bisexual and transgender people. In spite of this, in many places positive change is taking place due to the increasing number of LGBTI people all over the world being brave enough to “come out”. States and human rights mechanisms must work together with civil society to ensure lesbian, gay, bisexual and transgender rights.

Bangladesh rejected recommendations to repeal article 377 of the Criminal Code. In this joint statement with Boys of Bangladesh, ILGA expresses concern about the rights of LGBT persons in Bangladesh.

Cameroon received 15 recommendations on SOGIEI issues during it’s review, but only accepted one of these recommendations. Cameroon accepted a recommendation to investigate police violence that took place on persons because of their actual or perceived sexual orientation. However it rejected several recommendations including to decriminalize consensual same sex relations between adults; to protect LGBTI people from violence; to take measures to eliminate discrimination based on SOGI, including through public awareness actions; to respect the right to privacy, and; to protect LGBT human rights defenders.

ILGA worked with LGBTI rights defenders from Cameroon to prepare and deliver an oral statement during the adoption of Cameroon's UPR report during the 24th session of the HRC.

ILGA made a joint statement with Egale Canada during the adoption of the UPR report on Canada, drawing attention to the shortcomings of Canada’s asylum policy.

Accepted recommendations: To step up measures of protection against violence and discrimination on the grounds of sexual orientation by enacting laws that prohibit such discrimination, and take measures to ensure the effective exercise of the rights to peaceful association and assembly of the LGBT community; to take specific measures to ensure effective investigation of acts of violence against LGBT persons and hold the perpetrators to account; adopt the necessary measures to eradicate the diffusion, through the media, and by public officials, of stereotypes that may promote discrimination against persons based on their sexual orientation; and to adopt legislation assuring that LGBT people can freely exercise their rights to freedom of expression and peaceful assembly. Russia noted in its response that “the law does not discriminate against LGBT persons”, that “all acts of violence, regardless of whether perpetrated on members of the LGBT community ... are duly acted upon by the law enforcement agencies”, that “an offence committed on the grounds of hatred or enmity towards any social group is regarded as an aggravating circumstance” under the Criminal Code, and that the “dissemination of information that encourages any form of discrimination, including on the grounds of sexual orientation, is already prohibited”, although “freedom of the press is guaranteed and censorship is prohibited”.

The statement was read on behalf of the Russian LGBT Network and coordinated by COC Netherlands.

Uzbekistan received 4 recommendations on SOGIEI issues during its review and rejected all of them. Uzbekistan rejected recommendations to combat discrimination against LGBT persons, and to decriminalize consensual homosexual activity in compliance with obligations under the ICCPR. During the report adoption ILGA urged the government to take measures to address violence and discrimination against LGBT persons.